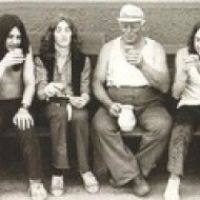 There is more than one artist with this name: 1) Man are a rock band from South Wales with a cult following. Originally the second incarnation of Welsh rock harmony group The Bystanders, they are a band with 'more history than the Greeks', who are celebrating their 40th anniversary this year. Man's history is full of weird, colourful stories. Some stories include getting arrested in Belgium on both of their visits, brawling with an Icelandic audience, meeting the likes of Tommy Cooper and Bill Graham, their many line-ups, and so on.

Read more about Man on Last.fm.

Man has been mentioned in our news coverage

Do you promote/manage Man? Login to our free Promotion Centre to update these details.