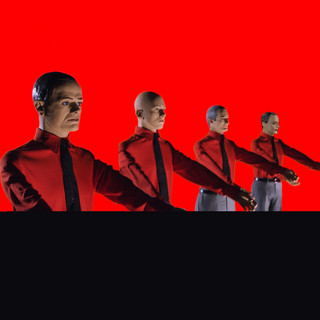 Electronic band, Kraftwerks were founded in 1970 in Dusseldorf, Germany. The band was set up by Ralf Hutter and Florian Schneider. A strictly electronic, minimalistic sound with melodies and vocals sung through a vocoder. The band are known as one of the most influential and important bands of electronic music.

Ralf Hutter, the only original member is now joined by Fritz Hilpert, Henning Schmitz and Stefan Pfaffe. In 2008 the other founding member Florian Schneider left the band.

Their first 2 albums were mostly exploratory jam music, played on a variety of traditional instruments including guitar, bass, drums, electric organ, flute and violin. Post-production modifications to these recordings were then used to distort the sound of the instruments, particularly audio-tape manipulation and multiple dubbings of one instrument on the same track.

This critically acclaimed album marked Kraftwerk's breakthrough and established them as purveyors of electronic music.

Florian Schneider officially left the band in January 2009, though news of his departure was reported as early as April 2008. His place will be taken over by Stefan Pfaffe.

Hundreds of artists today in nearly every electronic music subgenres bear witness to their work.

Kraftwerk has been mentioned in our news coverage

Below is a sample playlists for Kraftwerk taken from spotify.

Do you promote/manage Kraftwerk? Login to our free Promotion Centre to update these details.