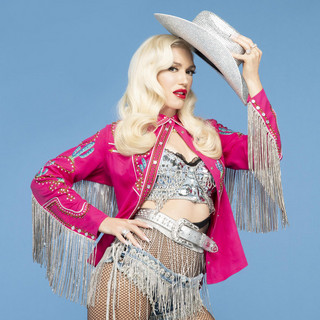 Gwen RenÃ©e Stefani (born October 3, 1969 in Anaheim, California, United States) is a singer-songwriter and fashion designer. She fronts the rock band No Doubt, whose 1995 release Tragic Kingdom - which spawned the singles Just a Girl, Spiderwebs, and Don't Speak - propelled them into stardom with sales of 16 million copies worldwide. In 2004, Stefani released her first solo album Love. Angel. Music. Baby. The album featured several collaborations with producers and other artists, including No Doubt bandmate Tony Kanal, Linda Perry, André 3000, Nellee Hooper, and The Neptunes. It was primarily inspired by pop and new wave music of the 1980s, and emerged an international success with sales of over seven million copies. The third single Hollaback Girl became the first U.S. digital download to sell one million copies. The debut album also drew attention to the Harajuku Girls, Stefani's entourage of four Japanese backup dancers named for the fashionable suburb in Tokyo. Originally hired in 2004 for the album, the Girls continued to appear alongside Stefani, and are featured in these music videos: "What You Waiting For?", "Rich Girl", "Hollaback Girl", "Luxurious", "Crash", "Wind It Up", "The Sweet Escape", and "Now That You Got It". Stefani's second solo album The Sweet Escape was released December 5, 2006. Collaborating again with her on the project were Perry, The Neptunes, along with Akon and Tim Rice-Oxley of Keane, and producers Pharrell and Kanal. Despite mixed reviews of the album as a whole, the title track The Sweet Escape became an international success and earned Stefani a Grammy nomination, and remains the most successful song of her solo career. Although it had been speculated that the album would contain only material originally written for L.A.M.B. that did not make the final cut, only two songs left over from L.A.M.B. were included in the record: 80's-influenced U Started It; and Wonderful Life, which features Depeche Mode's Martin L. Gore on guitar. Stefani is equally known as a fashion trendsetter. In 2003, she created a clothing fashion line named L.A.M.B. which shares the initials of her debut solo album. This collection was later expanded with the introduction of a newer line in 2005 called Harajuku Lovers, which draws its inspiration from Japanese culture and fashion. On May 26, 2006, Stefani gave birth to her first child, a baby boy named Kingston James McGregor Rossdale. The father is British grunge musician Gavin Rossdale, former frontman of the now-defunct bands Bush and Institute, who she married in 2002. In January 2008, Stefani's father-in-law confirmed that she would be expecting her second child in the summer. On August 21, 2008, second son Zuma Nesta Rock Rossdale was born. Gwen Stefani said in 2011 that she was no more planning to release another solo album. So we can say that the end of her solo period was in 2007 at the end of "The Sweet Escape Tour". Official website: www.gwenstefani.com User-contributed text is available under the Creative Commons By-SA License and may also be available under the GNU FDL.

Gwen Stefani has been mentioned in our news coverage

DJ To The Stars Martin 2 Smoove is launching his own club night!

The Game at Manchester Ritz review

Unity Radio teams up with Skiddle at Wickerman 2013

Below is a sample playlists for Gwen Stefani taken from spotify.

Do you promote/manage Gwen Stefani? Login to our free Promotion Centre to update these details.