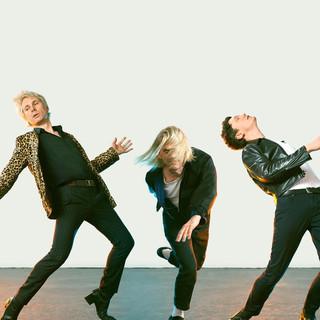 Franz Ferdinand is a Scottish rock band that formed in Glasgow, Scotland, United Kingdom, in 2002 and played an important part in the post-punk revival of the 2000s. The band is composed of Alex Kapranos (lead vocals and guitar), Bob Hardy (bass guitar), Nick McCarthy (rhythm guitar, keyboards and backing vocals) and Paul Thomson (drums, percussion and backing vocals).

The band first experienced chart success when their second single "Take Me Out" reached #3 in the UK Charts, followed by their debut album Franz Ferdinand which entered the UK album chart at #3. The band went on to win the 2004 Mercury Music Prize and two BRIT Awards in 2005 for Best British Group and Best British Rock Act. NME named Franz Ferdinand as their Album of the Year. From the album, three top-ten singles were released, "Take Me Out", "The Dark of the Matinée" and "This Fire". The band has also received several Grammy Award nominations.

The band is named after Archduke Franz Ferdinand whose assassination played a crucial role in the First World War. After seeing a racehorse named Archduke Ferdinand win the Northumberland Plate in 2001, the band began to discuss the Archduke's name as a possible name for the band. Ultimately they decided upon the name because they like the alliteration and sound of the name and the reference the assassination of the Archduke.

Franz Ferdinand has been mentioned in our news coverage

Below is a sample playlists for Franz Ferdinand taken from spotify.

Do you promote/manage Franz Ferdinand? Login to our free Promotion Centre to update these details.