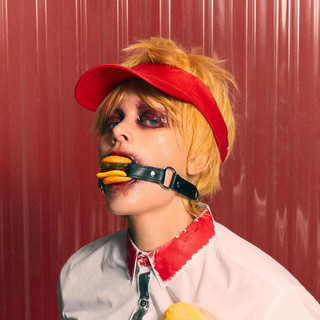 Fever Ray is the solo project of Karin Dreijer Andersson, who is one half of the Swedish electro act The Knife (the other half is her brother Olof Dreijer). Andersson was also the lead singer and guitarist for the defunct indie pop group Honey is Cool. The first, self-titled Fever Ray record was released digitally on January 13, 2009 and its first single "If I Had A Heart" was released on December 15, 2008. Born in Gothenburg, Sweden on 7 April 1975, Andersson currently resides in Stockholm, Sweden. What would you do if one decade into your career you suddenly saw one of your songs turned into a worldwide hit, won six Grammis in your native Sweden and your latest release was declared album of the year by one of the worldâ€™s most influential music websites? If youâ€™re Karin Dreijer Andersson, formerly singer with â€˜90s pop hopes Honey is Cool and was one half of The Knife, the answer is to take a couple of years off and return as a solo artist under a new name: Fever Ray. In Karinâ€™s own words, â€œI had so many songs to record that I just had to make an album. I thought I was going to have a longer break but I guess it will never happen. I can't stop working. My aim was to finish the album and now that it's done I'm a bit restless (good that The Knife has an opera to write then.) During the last years I discovered that I like to sing too, so I hope that my newly found live band Fever Ray will make it to the stages next year. We are rehearsing and building something beautiful and brilliant." www.feverray.com www.myspace.com/feverray www.vimeo.com/feverrayvimeo www.youtube.com/user/FeverRayMusic User-contributed text is available under the Creative Commons By-SA License and may also be available under the GNU FDL.

Fever Ray has been mentioned in our news coverage

Below is a sample playlists for Fever Ray taken from spotify.

Do you promote/manage Fever Ray? Login to our free Promotion Centre to update these details.