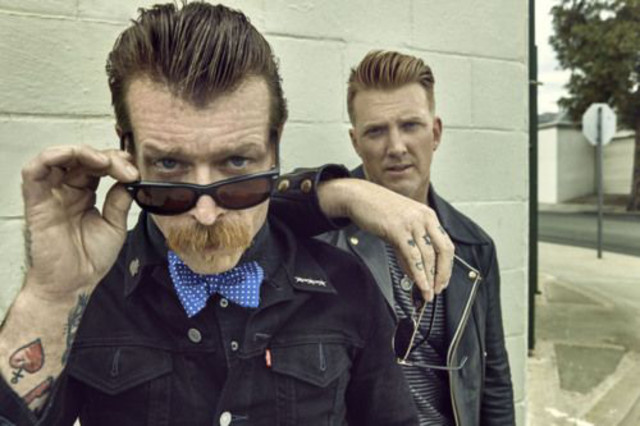 Eagles of Death Metal are an American rock band which formed in Palm Desert, California in 1998. The band consists of Jesse Hughes (vocals, guitar) and Josh Homme (drums), who are also the only constant members of the band. The current touring lineup consists of Hughes, Dave Catching (guitar), Brian O'Connor (bass, vocals) and Claude Coleman (drums). Homme rarely tours with the band due to commitments with Queens of the Stone Age, with Coleman being his current touring replacement.

The band has released three albums since their formation: "Peace, Love, Death Metal" (2004), "Death by Sexy" (2006) and "Heart On" (2008). Despite their band name, Eagles of Death Metal is not a death metal band. Hughes stated that a friend was introducing Josh Homme to the death metal genre. When he played a song by the Polish band Vader and made a claim that the song was within the death metal genre, Homme then referred to Vader as "The Eagles of Death Metal". After hearing this phrase, he wondered what a cross between the Eagles and a death metal band would sound like. In a 2003 interview Homme described the sound of the band as a combination of "bluegrass slide guitar mixed with stripper drum beats and Canned Heat vocals." Jesse Hughes is known by fans for his enthusiastic interaction with audiences at live performances. Read more on Last.fm. User-contributed text is available under the Creative Commons By-SA License; additional terms may apply.

Eagles of Death Metal has been mentioned in our news coverage

Five of the best acts at Reading and Leeds Festivals

Here are the latest Eagles of Death Metal mixes uploaded to Soundcloud.

Do you promote/manage Eagles of Death Metal? Login to our free Promotion Centre to update these details.