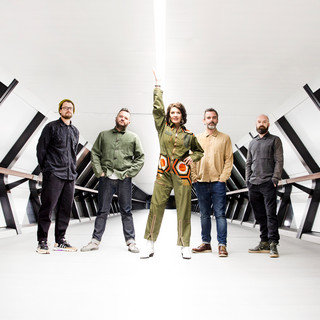 Who’d have thought it? Six albums in and Crazy are stronger and more relevant than ever. Funny how the tides of time turn, and how the sounds of a typically British type of house and disco - which The P have been forerunning for the last 15 years - are now more du jour then ever before. Way before the rise in prominence of disco, house and soulful pop from the likes of Todd Terje, Disclosure or Jessie Ware, Crazy P have spearheaded the revival (and perpetuation) of these sounds since 1997.

Its been three years since their last album ‘When We On’ on 2020 Vision. In that time the songwriting, production, and performing nucleus of Danielle Moore, Chris Todd, and James Baron have been constantly touring with their DJ and Soundsystem sets, and the live band shows which still see them regarded as one of dance music’s finest, and genuinely live, performers out there.

Like another UK house and disco pioneer Greg Wilson, Crazy P have managed to both uphold the heritage of soul, musicianship and song writing that is an essential part of the fabric of house and disco, and also stay current, letting those fundamental elements of the sound inform and mark out their takes on the club floors and younger audiences that they consistently turn inside out.

So to the now. A new album, their seventh, “Walk Dance Talk Sing” is out on May 11th 2015 in partnership with !K7. Accompanying worldwide tour and festival dates to follow throughout 2015. Suspect to expect something a bit different, with their never diminishing love of a dancefloor sitting alongside their immaculate craft of songwriting, production, some moments of beautiful introspection, and thrilling performance.

Crazy P has been mentioned in our news coverage

What to do on New Year's Day

Here are the latest Crazy P mixes uploaded to Soundcloud.

Do you promote/manage Crazy P? Login to our free Promotion Centre to update these details.