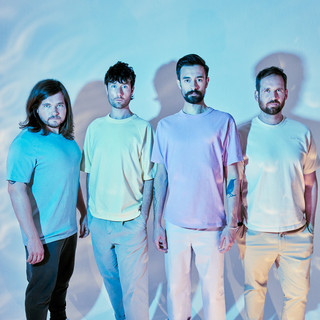 At first glance the striking artwork for Bastille’s second album, ‘Wild World’, may prompt a number of questions. Who are the two individuals balanced precariously above a cityscape? Why are they there? What will happen next? But Dan Smith’s own interpretation of the image is one that runs through many of the songs on Wild World, “To me, the image isn’t about what’s just happened or what happens next,” he begins. “It’s not about how they got there or how they get down. It’s about showing a moment — two friends existing in that split second in that exact space, two people framed in the vast context of this huge mad metropolis that we’ve all built. They’re there out of choice.”

It’s just five years since South Londoner, Dan, started Bastille alone in his bedroom, releasing 300 copies of Bastille’s debut single. Relentless gigging, genuine word of mouth and some smartly curated mixtapes meant that within three years — and with Chris Wood (drums), Will Farquarson (guitar) and Kyle Simmons (keyboards) added to the line-up, Bastille became a global phenomenon; the band’s chart-conquering debut album ‘Bad Blood’ selling over 4m albums alongside 11m singles. In the UK, the twice Number One album was certified double-platinum and named the biggest-selling digital album of 2013. Hit singles ‘Pompeii’, ‘Flaws’, ‘Laura Palmer’ and ‘Things We Lost In The Fire’ helped Bastille become that year’s biggest-selling global breakthrough act, with over a billion Spotify streams and in turn earning the band British Breakthrough at the following year’s Brits, along with two Grammy nominations. They have also collaborated with acts like Haim, Kate Tempest and Angel Haze, and Dan co-founded and co-runs an indie label, Best Laid Plans, helping to develop acts like Rag ’N’ Bone Man and Rationale.

And that, it turns out, was only the beginning. Bastille’s second album ‘Wild World’ retains the vivid, rich, filmic song-writing of its predecessor but pushes the band’s distinctive sound in exciting new directions. Lyrically, too, it’s a leap forward. “If our first album was about growing up and freaking out about it” Dan explains, “Our second is about trying to make sense of the world around you, both as you see it and as it’s presented to you through the media. It’s also about asking questions of the world and of the people in it. We wanted the album to be a bit disorientating - at times extroverted and introverted, light and dark.”

‘Wild World’ is spearheaded by single, ‘Good Grief’, principally a song about missing somebody but also, Dan adds, “About loss, grief and trying to get on with your life. It maps the chaotic process from the denial, through the drinking and dancing at a funeral and to the startling feeling of memories being triggered in everyday life.” The single is unmistakably a Bastille song, and fans who immersed themselves in Bastille’s early, dialogue-strewn mixtapes will enjoy its sampling of Kelly Le Brock from 80s movie Weird Science, but across ‘Wild World’ you’ll find numerous new additions to the band’s sonic architecture. “On the first record we didn’t have guitars simply because I couldn’t play guitar,” Dan smiles. “So we used strings, layered vocals and beats to get around that. This time round we’ve added them to the mix — but they’re still a massive novelty to us, so it’s been fun developing the band’s sound.” That’s clearly in evidence on ‘Blame’, which Dan describes as, “Our first foray into big guitar riffs, in a fictional standoff between two gangsters”.

Elsewhere the album’s self-contained narratives include ‘Warmth’, from whose lyrics the album title was plucked and which Dan explains is about that "feeling of helplessness you can feel when watching world events unfold through the TV” and the bombastic, festival-ready hip-hop-inspired ‘Send Them Off!’, which focuses on irrational relationship jealousy filtered through, in Dan’s words, “The Exorcist and Othello imagery with quotes from a trashy 70s sci-fi film”, and elegant ballad ‘Four Walls’, a take on sparse modern electronic music which was written two years ago on a tour bus in Germany, in response to Truman Capote’s ‘In Cold Blood’ and the questions it raises about capital punishment.

Fiery, string-laden track ‘ The Currents’ is one of the new songs that most closely echoes the sound pioneered on ‘Bad Blood’, and was written about, “Specific people on both sides of the Atlantic, and how it can be hard to believe they can think certain thoughts, let alone say them out loud or get on a podium and broadcast them.” It’s a song that like many others on the album, and even the album’s artwork, asks questions. “I want this album’s songs and imagery to inspire their own narratives,” Dan adds. “I love that we can go out into a field and get 50,000 people singing along to a song about charred, ashy corpses in an old Roman town. I’ve got a very clear idea of what these songs are about, but I also love it when people read their own stories in to them.”

Bastille has been mentioned in our news coverage

Here are the latest Bastille mixes uploaded to Soundcloud.

Do you promote/manage Bastille? Login to our free Promotion Centre to update these details.