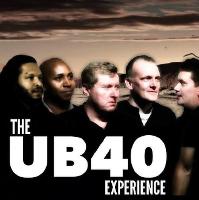 Featuring 'Stars In Your Eyes ' winner Andi Bagnali as Ali Campbell plus a line up of hand picked, world class musicians, the band are set to be one of the biggest and best tribute bands in Europe .

The UB40 Experience are the only UB40 tribute that play homage to all members of UB40.

Each member of the band has studied the playing techniques, style and sounds of the members of UB40 which they represent so that the real UB40 sound and feel is captured in the overall performance.

Members of the band have played alongside UB40's Brian Travers, Laurence Parry and Tony Mullins in addition to members of Steel Pulse, The Specials plus other top name bands.

UB40 EXPERIENCE hasn't been mentioned in our news coverage

Do you promote/manage UB40 EXPERIENCE? Login to our free Promotion Centre to update these details.