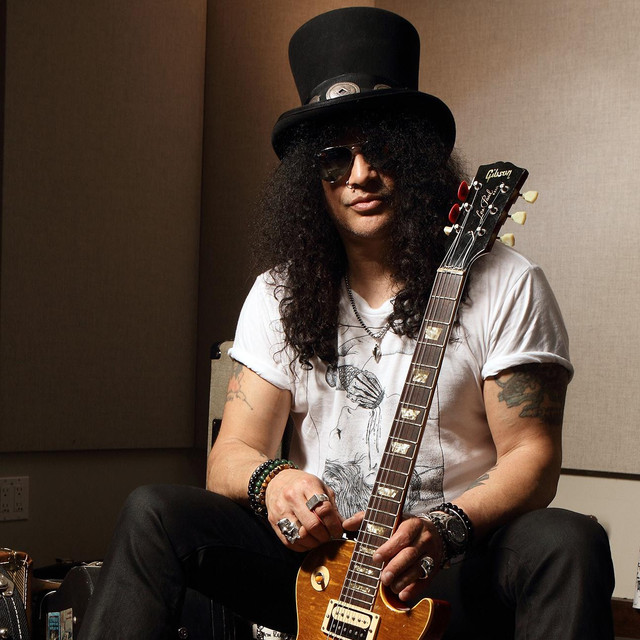 Saul Hudson (born 23 July 1965, Stoke, England), better known by his stage name Slash, is a British-American musician. He is the former lead guitarist of the American Heavy Metal band Guns N' Roses, with whom he performed and recorded between 1985 and 1996. He later formed Slash's Snakepit and co-founded Velvet Revolver with his former bandmates Duff McKagan and Matt Sorum, and his debut solo album, Slash , was released in April 2010. In 2011 he wrote and featured on Kick It Up A Notch, the end credit song for The Disney Channel Original Movie Phineas and Ferb: Across the 2nd Dimension. (Kick It Up a Notch Songfacts). He has written a self titled autobiography which was put to print on 2007. The You're A Lie Songfacts reports that Slash's second album, Apocalyptic Love, was produced by Eric Valentine and features Slash's touring band: vocalist Myles Kennedy (who also plays rhythm guitar), drummer Brent Fitz and bassist Todd Kerns. It is set for release on May 22, 2012. Slash has received critical recognition as a guitarist. In August 2009, Time Magazine ranked him #2 on its list of the "10 Best Electric Guitar Players of All-Time". He was also ranked #21 on Gigwise's list of the "50 Greatest Guitarists Ever". Slash was the first musician to own a signature amplifier created by Marshall for him. In 1996 the Marshall Slash JCM 2555SL was launched, it was built with the specs of Slash's own original 1987 Marshall Silver Jubilee 2555 amplifier. A total of 3000 of these amplifiers were made before it was discontinued. In his self titled album,"Slash" he has worked with many artists like Ozzy Osbourne, Fergie (Black Eyed Peas), Myles Kennedy (Alter Bridge), Kid Rock and Ian Astbury (The Cult). The singles released from the album are "Sahara","Back From Cali","By the Sword" and "Beautiful Dangerous". User-contributed text is available under the Creative Commons By-SA License and may also be available under the GNU FDL.

Slash has been mentioned in our news coverage

Below is a sample playlists for Slash taken from spotify.

Do you promote/manage Slash? Login to our free Promotion Centre to update these details.