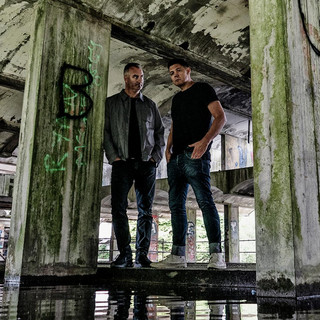 The legendary UK techno duo of Stuart McMillan and Orde Meikle have travelled far and wide, touring Australia, the USA , Europe, South America and Japan and they hold residencies at 3 of the UK's best clubs (Pressure & Return To Mono in their home town of Glasgow and Fabric in the nation’s Capital, London.)

SLAM ON FIRE: The last 2 years has been one of their busiest periods ever. Performing dynamic sets at many of the world’s leading festivals including Monegros, Oxygen, Bestival, 10 days off, Extrema, Glastonbury and T In The Park, they have also played at some of the world’s best clubs including the legendary Womb In Tokyo, Cocoon in Frankfurt, Rex in Paris and Berlin's infamous Watergate and Berghain to name a few. They recently celebrated 10 years of their illustrious club night Pressure @ the world famous Arches club in Glasgow with a Mixmag cover mount CD and have started their own Podcast series, recorded live at their Return To Mono club nights the Glasgow bunker, Sub Club. They have had a string of monster releases on their own PARAGRAPH & SOMA imprints, while releasing and remixing on Drumcode, Ovum, Material Series and Mobilee.

PARAGRAPH: The first release “City Destroyer”, with its sinister pitched vocals and crafty, crisp and skippy electronic sound-scapes, secured club plays from the likes of Richie Hawtin, Adam Beyer and Laurent Garnier. Paragraph 2, “Hot Knives”, was even bigger staying in the Beatport top 10 for 10 weeks with plays from just about every big name including Carl Craig, Anja Schneider, Dave Clarke and Dubfire. Paragraph 3, 4 and 5 “One Note Samba”, “Variance”, “Heart of the Soul” respectively, were massive successes seeing Slam combine their love and talents for both House & Techno on the same EPs. Slam now bring their friends and peers onto the label to remix the first few Paragraph releases with Germany’s finest tag-team, Pan-Pot first to bat. Turning out 2 outstanding remixes, they set the bar high for those who follow, including Harvey McKay, Alan Fitzpatrick, Gel Abril, Adam Beyer & Jesper Dahlback, Steve Lawler, Chris Liebing, Gary Beck and Julien Chaptal. There will also be an album with an exciting new concept based around Paragraph later in the year.

REMIXES & RELEASES: This surge in activity has put them in demand as remixers with fellow big names such as Josh Wink, Paul Ritch, Pan-Pot and Radio Slave calling on their services. On top off all this they still find the time for new projects like Paragraph records. New releases include Paragraph 5, featuring Slam tracks “Variance” and “Collecting Data”, Paragraph 6, the Pan-Pot remixes of “Room 2” and Slam remixes of Samuel L. Session “Can You Relate”, Paul Ritch “The Wolf” and Fabio Gianelli “Apparlas” on Material. They have recently released a mammoth Techno work out on Adam Beyer’s Drumcode Label (with another following soon), and another storming track, along with Rejected’s Joris Voorn & Edwin Oosterwal, for Podium boss Len Faki’s Figure label. SLAM have also recently remixed Josh Wink ‘Everybody to the Sun’ for Ovum and The Black Dog’s “CCTV Nation” for SOMA.

SLAM GIGS: Slam have just curated and played at the massive Slam Tent at Scotland’s T in the Park festival (which they have organised since 1997) and they also recently headlined the G stage at the Glastonbury festival as well as performing live at Awakenings and Extrema in Holland and Space in Ibiza. They also hosted a special Soma Records and Paragraph show case at La Terrrazza in Barcelona during Sonar. Slam are residents at Pressure in Glasgow and Fabric in London.

Slam has been mentioned in our news coverage

Musika celebrate 12 years in Edinburgh with Eats Everything

Here are the latest Slam mixes uploaded to Soundcloud.

Do you promote/manage Slam? Login to our free Promotion Centre to update these details.