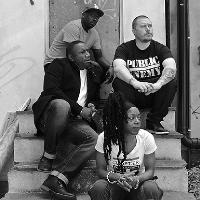 The Rampage crew are a legendary sound system from London England, with a rich and varied career in music and broadcasting that is extensive and impressive. In the Urban world they have literally “Done Everything” Tour DJs for Kanye in London, Nas in Cardiff, Wyclef in Miami, Jay-Z in Scotland, Usher in London, etc. Legendary urban club nights such as SW1 in Victoria, commonly known as one of the best black music club nights to ever take place in the West end of London.

A catalogue of productions, remixes, releases, and compilation albums spanning 20 years of UK music. The largest static sound system at the Notting Hill Carnival, with over 15 thousand people at any one time has featured performances from Sean Paul, Swizz Beats, Tinie Tempah, Mark Ronson, Buju Banton, Ryan Leslie, Ms Dynamite, Lloyd, Wiley, etc 15 years as broadcasters with the BBC with event coverage, documentaries, live broadcasts, match reporting, music punditry and daytime radio. Known as the first DJs to “Multi genre” mix and also the first to perfect muti deck mixing in particular on “Live radio”. Rampage have done gigs as far a field as Kenya, Hungary, Dubai, Abu Dhabi, Miami, Atlanta, Cyprus, Ibiza, and all over the U.K. They have the longest running RnB club night in Ayia Napa Cyprus at 13 Years, Rampage continue to do what they do.

Rampage Sound has been mentioned in our news coverage

Here are the latest Rampage Sound mixes uploaded to Soundcloud.

Do you promote/manage Rampage Sound? Login to our free Promotion Centre to update these details.