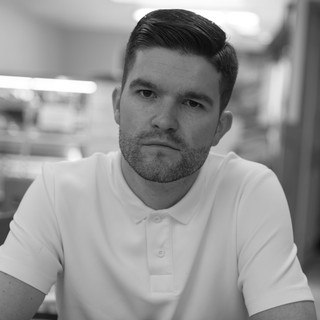 The CLF Art Cafe in London

At the mere age of eighteen, Chris Reed (then Plasticman) had well and truly entrenched himself in the South London UK garage world. From early on, he was obsessed with the darker sounds that the genre had to offer, and would often play works from the likes of Wookie, Zed Bias, Groove Chronicles, and Steve Gurley. At that point Reed was a member of the 'Fearless Crew, alongside Tricks & Spells, until a split in 2001 freed him up to pursue his solo productions.

Reed began by experimenting with production on FruityLoops, as were a growing community of young producers, all attempting to make dark garage tracks that would catch the ear of Big Apple Records resident DJ Hatcha. Others around at the time included Skream and Benga, amongst more experienced heads Artwork, Benny Ill & Horsepower Productions. By the end of 2001, although Plasticman's tracks were generally overlooked by DJ Hatcha, they were however picked up by East London Grime pioneer, DJ Slimzee, who signed Plasticman's Venom / Shockwave to his Slimzos imprint, and released it in early 2002.

By 2003, Reed had been supported by DJ Hatcha on tracks such as Hard Graft, which saw his grimy take on the instrumental sound being welcomed by the FWD family, leading to releases on Ammunition Promotions' Soulja, and ROAD imprints and in the summer saw Reed's first appearance at the world famous FWD event at Plastic People, London.

Soon after, Reed had established himself as a FWD favourite and was announced as one of four residents at the club in 2004, alongside bass music royalty, DJ Hatcha, Youngsta and Rinse FM owner, DJ Geeneus. This also led to Plastician earning himself a weekly slot on East London pirate station, Rinse FM - which he still remains on to this day.

In 2006, Reed was offered a slot on BBC Radio 1's 'The Residency', alter becoming the show we know today as 'In New DJ's We Trust'. This was the tipping point for an ongoing legal struggle which forced him to change his name from Plasticman to Plastician. He spent 18 months on the station before returning to Rinse FM to continue his weekly slot, which he had been continuing under the alias "Blue Stripe" during his time at the BBC.

2007 saw the release of 'Beg to Differ', Reed's debut LP and his first release under the Plastician alias. It received critical acclaim, and contains some of Reed's most recognizable works such as 'Japan' and 'Intensive Snare' with North London MC Skepta of Boy Better Know. Plastician stands apart from his peers unique in that he is respected as one of the true pioneers of both the dubstep and grime. His popularity has continued to rise, with his tastemaking Rinse FM work, his consistently on point productions and unparalleled DJing dexterity, culminating in 2013 with a nomination for the UK Bass Music Awards in association with Skiddle.

Plastician has been mentioned in our news coverage

Wiley to take over the Albert Hall Manchester

DJs urge Sadiq Kahn to stand up for fabric

Here are the latest Plastician mixes uploaded to Soundcloud.

Do you promote/manage Plastician? Login to our free Promotion Centre to update these details.