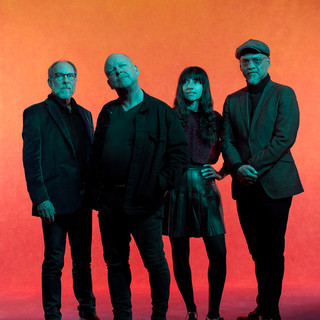 In the late 1980s and early 1990s, a Boston quartet with the innocuous name of Pixies cranked out four albums and an EP that proved infinitely more influential than their sales implied. Featuring surf-punk riffs, frontman Black Francis' otherworldly screams, Kim Deal's sturdy bass lines and quiet verses that exploded into ear-shredding choruses, the band's sound served as a blueprint for Nineties popular rock bands, including Nirvana.

Black Francis, born Charles Michael Kitteridge Thompson IV, spent his childhood moving between L.A. and Boston suburbs, picking up music at used record stores and hearing rock played on the jukebox at his father's bar. He met guitarist Joey Santiago at the University of Massachusetts and the pair started writing songs together. Thompson dropped out of college his junior year and moved to Puerto Rico, where he gave himself an ultimatum: He would either go to New Zealand to see Halley's Comet or form a band.

In 1986 Thompson and Santiago moved to Boston to seriously pursue music. The Filipino Santiago picked the name Pixies out of the dictionary and they took out a newspaper ad for a bassist interested in Hüsker Dü and Peter, Paul and Mary. Ohio native Kim Deal — who worked in a doctor's office and had just arrived in the city — responded and soon recruited drummer David Lovering, a friend of her soon-to-be-ex-husband, John Murphy. On the advice of his father, Thompson adopted his stage name Black Francis.

Pixies began gigging at Boston clubs like the legendarily filthy Rat and recorded a demo called The Purple Tape that drew the attention of Ivo Watts-Russell, the owner of the hip English label 4AD. Watts-Russell trimmed the Tape down into Come on Pilgrim, and released it as an EP in 1987. Just months later, the band was back in the studio, this time with cantankerous engineer Steve Albini, to bang out their full-length debut Surfer Rosa in a little over a week. The record was well received in England, but wasn't widely available in the States; the following year, Pixies inked a U.S. deal with Elektra.

Before the band returned to the studio, they toured Europe opening for Throwing Muses, famously switching spots on the bill as Pixies' profile continued to grow. In the fall of 1988, they returned to Boston to record Doolittle (Number 98) with producer Gil Norton, and the first cracks in the relationship between Deal and Francis began to manifest in the studio as the bassist bristled under the singer-guitarist's creative dominance (Surfer Rosa's "Gigantic" remains the only Pixies track to feature Deal on lead vocals). The album wound up including some of the band's most pop-oriented melodies ("Here Comes Your Man," "Monkey Gone to Heaven"), which drew more attention from mainstream radio and MTV. Pixies embarked on an international tour appropriately called Sex and Death, inspired by their off-kilter lyrics, and returned to the U.S. to open for the Cure.

The band reconvened in Los Angeles to record Bossanova (Number 70, 1990) without Deal, who quickly flew out West to repair her relationship with her bandmates. For the first time, recording became a chore, as most of the tracks weren't written and prepped in advance. Francis ultimately settled on a sci-fi theme for the album, conjuring images of UFOs, planets and stars over some of the band's most surf-inspired guitar lines. The album was released in 1990, the same year Pixies headlined England's Reading Festival and Deal released her first disc with side project the Breeders, Pod, which featured the Throwing Muses' Tanya Donnelly. Tensions within Pixies nearly poisoned sessions for 1991's Trompe Le Monde in Los Angeles, which wound up being their last. Francis recruited Pere Ubu keyboardist Eric Drew Feldman for the record in what was practically a rehearsal for his impending solo album.

Pixies has been mentioned in our news coverage

Below is a sample playlists for Pixies taken from spotify.

Do you promote/manage Pixies? Login to our free Promotion Centre to update these details.