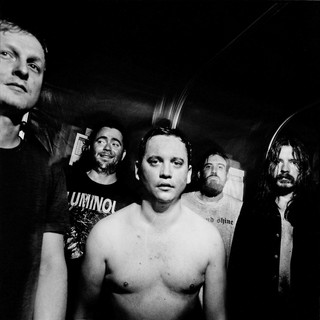 English rock outfit Pigs Pigs Pigs Pigs Pigs Pigs Pigs (or "PIGSx7" for short) combine acid rock, psych metal, and stoner influences into a thick sludge of riffs and menacing bellows. Hailing from Newcastle-Upon-Tyne, Pigs were formed by vocalist Matt Baty, guitarists Sam Grant and Adam Ian Sykes, bassist John-Michael Hedley, and drummer Ewan Mackenzie. Influenced by Black Sabbath and Monster Magnet, the band shares a similar love for noise as contemporaries Part Chimp and Hey Colossus. They issued a split release with Glasgow band the Cosmic Dead in 2013, but their contribution "The Wizard and the Seven Swines" would be their only official output until four years later. Their debut LP, Feed the Rats (Rocket Recordings), arrived in 2017 and featured just three songs that clocked in at over 40 minutes. In May of the same year, Mackenzie parted ways with Pigs and was replaced by Christopher Morley. ~ Neil Z. Yeung, Rovi Read more on Last.fm. User-contributed text is available under the Creative Commons By-SA License; additional terms may apply.