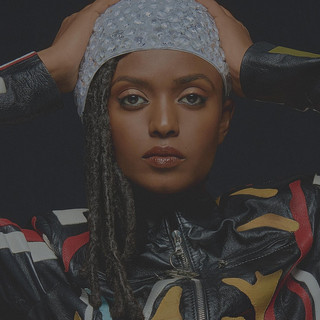 Kelela Mizanekristos is a singer based in Los Angeles. Her heritage is Ethiopian, and as a teenager she was voted Most Likely to Be a Pop Star.

Kelela's mixtape CUT 4 ME was released on October 1st, 2013 on producer Kingdom's Fade to Mind label. Of her mixtape, she says to Rookie Mag, "I will work with all of these producers for all of my life. This mixtape is the first time I was ever able to say exactly what I meant to say. It’s a statement."

(2) Alternative R&B vocalist and songwriter Kelela was raised in suburban Maryland and didn't have aspirations as a singer until she started studying jazz. Subsequent obsessions with Amel Larrieux and Little Dragon helped push her toward finding her own style -- one she found after she moved to Los Angeles. She connected with Teengirl Fantasy and contributed to the duo's Tracer album on the song "EFX." This led to meeting the Fade to Mind label's Prince William, who exposed her to his associates' lean yet sharp and deep productions. Knocked out by what she heard, she provided vocals for Kingdom's August 2013 single "Bank Head" (taken from the Vertical XL EP). With contributions from Fade to Mind and Night Slugs producers such as Kingdom, Bok Bok, Girl Unit, Jam City, and Nguzunguzu, Kelela sought to make a mixtape of tracks that sounded like remixes. The release, titled Cut 4 Me, was issued in October 2013 as a free download through Fade to Mind. It was one of the year's more striking debuts. ~ Andy Kellman, Rovi

Her first extended play, ''Hallucinogen'', was released on the 9th of October 2015 on Warp / Cherry Coffee Music and was met with critical acclaim, with Pitchfork saying ''her emotions are revolutionary'' in its glowing review of the EP. Read more on Last.fm. User-contributed text is available under the Creative Commons By-SA License; additional terms may apply.

Kelela has been mentioned in our news coverage

Kelela heads to Manchester in 2018

Below is a sample playlists for Kelela taken from spotify.

Do you promote/manage Kelela? Login to our free Promotion Centre to update these details.