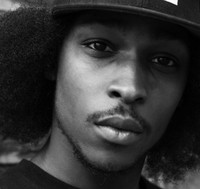 JME (real name Jamie Adenuga) is the owner & CEO of Boy Better Know, a North London-based record label, along with his brother Skepta. He started out producing on mobile phone ring tones, then moving on to Mario Paint, Game Boy Camera and currently Fruity Loops. Adenuga also co-owns with UpTown Records his own T-shirt chain, bearing the labels of himself, his record label Boy Better Know, and his dormant club night Straight Outta Bethnal. Just released his debut album Famous? and set release an album through a major label with his crew Boy Better Know.

JME has been mentioned in our news coverage

Below is a sample playlists for JME taken from spotify.

Do you promote/manage JME? Login to our free Promotion Centre to update these details.