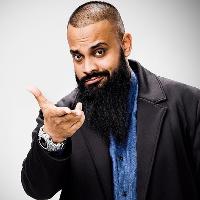 In 2014, Khan uploaded his first video on Facebook. In June 2014, Khan first performed on stage was opening for Aamer Rahman at Birmingham Repertory Theatre. His second time on stage was at a comedy evening at the Library of Birmingham BBC Asian Network organised for Comic Relief, with Citizen Khan.[3]

In June 2015, Khan whilst performing as his character Mobeen, a Muslim living in Small Heath, Birmingham,[3] made a video expressing mock outrage at the apparent use of Paki, a racial slur for people of Pakistani descent,[4] and called for boycott of the film when a lead character[5][6] Vivian, played by Lauren Lapkus.[1] shouted "the Pachys are out of containment", (an abbreviation of[5] the North American pachycephalosaurus).[7] In the video, Khan recounts a recent trip he and his friend took to the cinema to watch the film,[4] described some awkward incidents in the cinema whilst watching the film[7] and raises the point that the phrase could sound exceptionally racist to the untrained ear.[7] In six days, the video was watched over 340,000 times on YouTube and has received over 700,000 views on Facebook.[4] Khan's hashtag on Twitter, #BoycottJurassicWorld has gained attention[8] and viewers also took to Twitter to voice their shock at the use of the derogatory term.[1][9][10] After the Birmingham Mail publicised the story, Khan was interviewed by radio stations in American and Indonesia.[3]

In June 2015, Khan made a short film Roadman Ramadan as part of the British Muslim Comedy series, five short films by Muslim comedians commissioned by BBC to released on BBC iPlayer.[11][12][13] Khan's sketch was a guide to Ramadan, the Islamic month of fasting during daylight hours, which sees Khan's character Mobeen guide his newly converted friend Trev through his first Ramadan. In July, Khan gave up his job as a school teacher to pursue a career in comedy after his YouTube clips went viral.[3]

Guz Khan hasn't been mentioned in our news coverage

Do you promote/manage Guz Khan? Login to our free Promotion Centre to update these details.