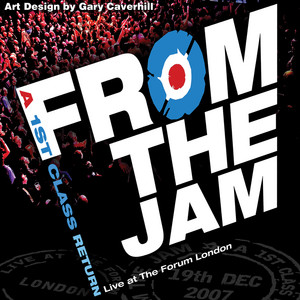 From The Jam tickets and 2021 tour dates

From The Jam 'That's Entertainment' Tour

The Mick Jagger Centre in Dartford

From The Jam Acoustic'

Bruce Foxton is a part of the English Rock and Roll establishment. A musician, who is most commonly recognised as the bass player in legendary bands The Jam and Stiff Little Fingers. In The Jam, he and drummer Rick Buckler were the driving force, power and rhythm section behind singer, guitarist, and songwriter Paul Weller.

Bruces versatility is evident, taking lead vocals on "David Watts" (The Kinks) and "News Of The World", which was one from his catalogue of own compositions. Foxtons most notable work being "Smithers-Jones", done with bass/guitar/drums for the B-side of "When You're Young" and later reworked with strings for the Setting Sons LP.

After The Jam split in '82, Foxton pursued a solo career. He had a hit with the single "Freak" and collaborated with other musicians, before staying with with SLF for fifteen years and recording four albums.

Bruce now joins Russell Hastings and Mark Brzezicki (The Cult, Ultravox & Procol Harum). Collectively the are 'From The Jam' and will be touring throughout the UK in 2012 playing the very songs that made 'The Jam' and Foxton so successful.

From The Jam News

From The Jam has been mentioned in our news coverage

From the Jam, Bad Manners and The Dualers visit Leeds Ska & Mod fest

Southend's In The Park festival 2017 is now on sale

More From The Jam news »

From The Jam playlist

Below is a sample playlists for From The Jam taken from spotify.

From The Jam videos

Do you promote/manage From The Jam? Login to our free Promotion Centre to update these details.