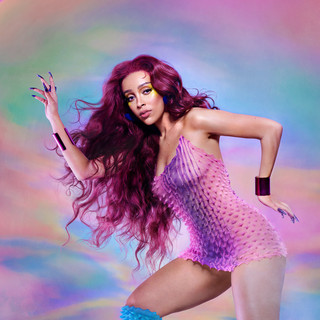 Amala Zandile Dlamini (born October 21, 1995), known professionally as Doja Cat, is an American rapper, singer, songwriter, and record producer. Based in Los Angeles, she signed a recording contract with RCA Records in 2014, subsequently releasing her debut extended play, Purrr!, and a series of singles, including "Go To Town", "So High” and "Tia Tamera". Doja Cat rose to prominence in 2018 with her single "Mooo!", which became a viral success on YouTube. She studied piano and danced as a child and teenager. The rap her brother listened to motivated her to develop her writing and rapping skills. She is noted to be inspired by Erykah Badu, Pharrell, Jamiroquai, PartyNextDoor, and Drake, as well as Indian culture, Hinduism, and Japanese culture.

Doja Cat released her debut studio album, Amala, in 2018 and a deluxe repackage in 2019.

Doja Cat has been mentioned in our news coverage

Below is a sample playlists for Doja Cat taken from spotify.

Do you promote/manage Doja Cat? Login to our free Promotion Centre to update these details.