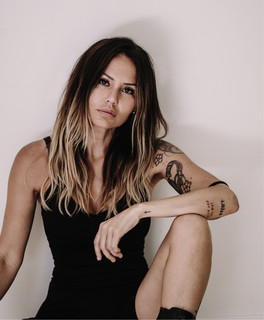 Born in the shadow of the sails of Scampia, tough neighborhood on the outskirts of Naples. Born in 1980, he embarked on a career in the music business is not without roll up their sleeves, working first in the premises as a waitress and then as a dancer for several years.

She moved to northern Italy for compulsory education, begins a journey into the world of fashion studying to be a fashion designer, but it takes little to understand that his path was in a completely different direction, enthusiasm for nightlife premises gave her the right reason to start a path which now has a long line of professionals in the field estimate that, first of all for his talent.

Check back soon to live in his hometown, Naples, where he met Giuseppe Cennamo, DJ and producer Neapolitan (Desolat - Sci + Tech - 8bit - Carillon), which leads Deborah to deepen his knowledge to new genres and trends, giving shape to a charisma that now has been busy with productions signed Sola_mente Records, label founded in March 2013 by the same Deborah, which today can count on collaborators such as Dj Simi and Giorgio Rusconi.

His tracks also found positive results in well-known names in the world of DJing, from Magda to Dj Ralf, passing by Someone Else and Layo & Buswaka. His music in a few years, has become a hallmark, a good fusion of hard techno and minimal sounds without ever being granted. All this is synonymous with passion and character.

To date Deborah De Luca plays in many clubs all over the world: France, Spain, Portugal, Italy, Greece, Turkey, Switzerland, Germany, Morocco, Slovenia, Malaysia, Indonesia, Armenia, Russia and continues to produce music is always different, although that is not part of any current or fashion, puts agree tastes different. Read more on Last.fm. User-contributed text is available under the Creative Commons By-SA License; additional terms may apply.

Deborah De Luca has been mentioned in our news coverage

Below is a sample playlists for Deborah De Luca taken from spotify.

Do you promote/manage Deborah De Luca? Login to our free Promotion Centre to update these details.