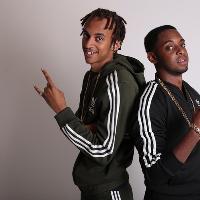 D-Block Europe (often abbreviated to DBE) is a British hip hop duo, consisting of Young Adz and Dirtbike LB, from Lewisham, London.[2] Their name is a reference to The Lox (also known as D-Block).[3] The duo rose to fame in 2017 after releasing numerous singles including "Large Amounts".

D Block Europe has been mentioned in our news coverage

Do you promote/manage D Block Europe? Login to our free Promotion Centre to update these details.