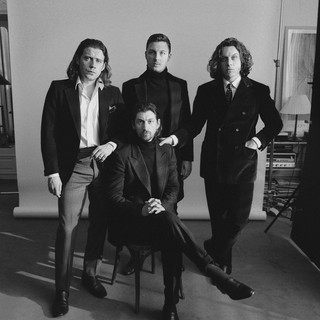 Sheffield, England's Arctic Monkeys began when teenaged neighbors Alex Turner and Jamie Cook received guitars for Christmas 2001; soon, the pair was rehearsing with school friends Andy Nicholson (bass) and Matt Helders (drums). They began playing locally in mid-2003 and soon began handing out CD-R demos to fans, who took it upon themselves to file-share the songs. This in turn bolstered Arctic Monkeys' fan base, which was further consolidated when the music was uploaded onto a fan-created MySpace page for the band. British fans were especially impressed with Turner's thickly-accented vocals and pointed lyrical style, which commented on British youth culture and mores.

A 2005 EP, Five Minutes with Arctic Monkeys, was pressed onto limited-edition vinyl and CD, as well as digitally via iTunes, and they began playing small stages at British festivals, drawing large crowds. The band's debut single, "I Bet You Look Good on the Dancefloor," went to Number One in the U.K. in late 2005; the following January, their first album, Whatever People Say I Am, That's What I'm Not, became one of the fastest-selling British albums of all time, beating the first Oasis album as the biggest debut in U.K. rock history. (It debuted at Number 24 in the U.S.) The second single, "When the Sun Goes Down," was also a U.K. Number One hit. By April 2006, they issued an EP called Who the Fuck Are Arctic Monkeys?, featuring new material. Shortly afterward, founding bassist Nicholson left the group, citing exhaustion from touring. Nick O'Malley, another Sheffieldian who'd played with the Dodgems, filled in on tour and soon became a permanent menter. Together, the newly refurbished quartet recorded a new single, "Leave Before the Lights Come On," released that August. In April 2007, Arctic Monkeys' second album, Favourite Worst Nightmare, was issued, going straight to Number 1 in the U.K. and Number 7 in America. Turner and Miles Kane of the Rascals formed a side project called the Last Shadow Puppets, and released The Age of Understatement in May 2008.

Arctic Monkeys has been mentioned in our news coverage

Below is a sample playlists for Arctic Monkeys taken from spotify.

Do you promote/manage Arctic Monkeys? Login to our free Promotion Centre to update these details.