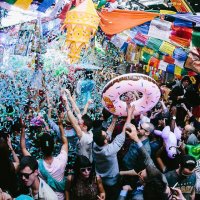 Keep track of Elrow events, tickets and news - all in one place. Join this group now for updates as they happen!

Elrow's biggest UK show is back this summer. The first headliner and theme has been announced.

Barcelona-born, international party Elrow will hold their biggest event to date this summer in London. The wild, one-day extravaganza will take place at Trent Park, to the north of the city, on Saturday 17th August.

In the last half decade Elrow has become one of the biggest party brands in the world, thanks to their careful combination of incredible, outlandish production and top flight DJs which attract a wild, fun-loving crowd. The last time Elrow held a huge event in London, they did so at the more central Olympic Park, but have easily outgrown that location.

The new site will allow them to place three stages of tech house, house and techno music alongside countless inflatables, theatrics, costumed characters and activity areas in the space as they are preparing to take up the whole park.

Jamie Jones has been confirmed as the first act to play at elrow Town London, he'll captain the El Triangulo de las Rowmudas megaship, as it battles against the newly awoken Kraken, angry and hellbent on swallowing up the party.