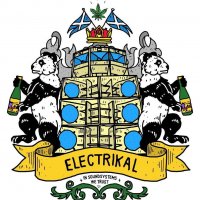 Keep track of Electrikal events, tickets and news - all in one place. Join this group now for updates as they happen!

next 3 Electrikal Events view all

Electrikal Sound first came to life as a staple part of Edinburgh?s sound system culture, helping to spread awareness of the brand globally. Having toured around Europe, the UK and on the festival and club circuits, they?ve gradually been making a name for themselves, cutting their place in the fabric of electronic music. rnrnrnA Scottish, forward thinking consortium of bass music, Electrikal Sound?s team was established in 2009. The sound system itself has become as recognisable as the music it plays, a premium quality 50k custom build, featuring blue horns and a natural wood finish. Optimised for sub bass frequency music, it?s provided reinforcement for over 4000 people. It?s proven an unforgettable experience for most, whether introduced to the system at Outlook and Dimensions Festivals in Croatia, or any of the other world renowned venues Electrikal Sound have debuted music.rnrnrnAnd following this successive run of shows, the outfit have developed a subset of their musical venture, an imprint they?ve called Electrikal Records. Channelling the same ethos as their DJ sets, Electrikal Records will be a platform for music which sounds as ground breaking on a rig as it does in studio monitors. Their focus lies primarily with quality, rather than disqualifying any particular genre or tempo. After all, good music is good music.rnrnThe collective itself is incredibly diverse. Bringing together a range of eclectic tastes, the A&R skillset behind Electrikal Records features a phenomenal scope. Having described it previously as an environment where tastes ?constantly evolve?, the label is sure to encompass an environment of constantly changing creativity. Not containing themselves to any paradigm and ensuring they pedestal their community lead attitude, just like the sound system, Electrikal Records is sure to grow from strength to strength. rnrnAfter laying their hands on dubplates from the likes of Sean Paul, Sizzla, Dub Phizix and more, it?s no surprise Electrikal Records have dipped into this new endeavour, having developed years of expertise whilst becoming entrenched in not only sound system culture, but the wider music scene. And with the year wrapping up, 2017 is looking to be even brighter for an already thriving team.