Three days of artfully curated music at one of the most idyllic locations in the UK, the Midnight Sun Weekender is a festival of the kind dreams are made of.

Hosted in the stately grounds of Lews Castle on the remote Island of Lewis in the Outer Hebrides, Midnight Sun is a destination festival with a difference. Inviting internationally recognised, top-line artistes to the picturesque Western Isles of Scotland, many of whom for the very first time, this boutique event will also be the first festival completely powered by green energy sources.

Opening the festival with a UK headline exclusive will be one the world’s finest rock propositions… THE PRETENDERS. Led as ever by the eternally cool Chrissie Hynde, the iconic band have amassed an enviable repertoire of hits spanning six decades. With classics like “Talk Of The Town”, “Kid”, “2000 Miles”, “Back On The Chain Gang” and many more to spare, expect to hear material from their hotly anticipated 2023 release ‘Relentless’ too.

Following-up on Friday night will be an act of an equally formidable pedigree… PRIMAL SCREAM. One of Scotland’s finest exports with a genre-shredding back catalogue that has turned alternative music on its axis more than a few times, Bobby Gillespie and co. will be storming Lews Castle with a headline set for the ages. From the Acid dipped thrills of ‘Screamdelica’ classics to the techno-entrenched spills of ‘XTRMNTR’ cuts and unexpected hoedown hits like “Country Girl”, expect a diverse and uncompromising set from one of the best live acts in the business.

Delivering a choice line-up of acts across three days, supporting sets will come from longstanding Britpop favourites OCEAN COLOUR SCENE fresh from their wildly successful reunion shows, plus Jason Pierce’s gospel/shoegaze game-changers SPIRITUALIZED as they bring space-age classics and scintillating new cuts from their 2022 album ‘Everything Was Beautiful’.

Elsewhere, Scottish royalty and former Orange Juice founder EDWYN COLLINS will be offering a songwriting masterclass guaranteed to swoon, whereas indie-electronica experts PUBLIC SERVICE BROADCASTING will be bringing the brooding sound of Berlin to the bonny Isle of Lewis as they extend their ‘Bright Magic’ tour.

An opportunity to hear some of the finest rising sounds from Scotland and beyond, alongside a must-see set from Glasgow favourites HONEYBLOOD, performances from ADO MATHESON, THE CHOIR, THE JOSHUA HOTEL, and IZZIE YARDLEY will be providing supporting sets tailor-made for those with fine taste.

With more names still to come, keep your eyes peeled for some very special artists to be announced very soon.

Extending a warm welcome to music fans in search of a getaway like no other, the Midnight Sun Weekender will take place between Thursday 25th May to Saturday 27th May next year.

Launching for the first time in 2023, The Midnight Sun Weekender is a collaborative event organised by Charlie Clark and Ian MacArthur. Founder of successful Scottish indie band Astrid, Charlie Clark was also part of the Reindeer Section (with members of Snow Patrol, Belle & Sebastian and Mogwai). Charlie worked as Music Manager for Houston Hospitality in LA, and is currently the head booker for Glasgow institution Nice’n’Sleazy. His co-organiser, Ian MacArthur, is a Scottish Chartered Accountant and a Barrister. During a long career in the private sector, he has also worked for Virgin Records and later became the worldwide Group Chief Executive for The Big Issue, responsible for turning around its fortunes. Together they have also set up the Outer Hebrides based indie label No Big Deal Music.

Speaking about what to expect from the first ever Midnight Sun Weekender, co-founder Charlie Clark says:

“The Midnight Sun Weekender will be the first ever major pop and rock Festival to be held in the Western Isles. It will be held, annually, on Lews Castle Green, the iconic setting in front of Lews Castle and overlooking Stornoway Harbour.”

Not content to be the first festival of its kind in the Outer Hebrides and with one of the finest line-ups to boot, the Midnight Sun Weekender will also be making strides to address many of the other ethical imbalances of the wider festival industry. Eco-friendly and environmentally sustainable, the festival will be completely powered by hydrogen produced on the Isle of Lewis, leading the way to becoming one of the greenest festivals of our generation. Intending to lead by example in addressing the gender balance that has crept into more established festivals in recent times, Midnight Sun is also guaranteeing a 45% to 55% Female to male ratio of performers across the weekend.

Promising a weekend of the finest sounds in alternative music in an awe-inspiring setting that needs to be seen to be believed, this highly prestigious, boutique festival will make its grand debut in 2023. Stay tuned for further updates from the Midnight Sun Weekender in the coming weeks… 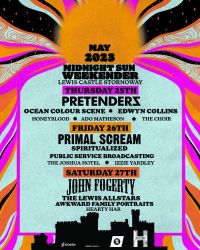 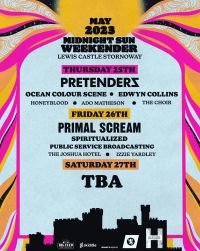 Get to Midnight Sun Weekender by