About Burn It Down Festival

Burn It Down is back and bringing the heat to the South coast. After

festival as tastemakers of the finest up and coming UK

Burn It Down is back and bringing the heat to the South coast. After a triumphant return in 2021, the south-west’s largest indoor festival is back to showcase the hottest acts on the alt scene, solidifying the festival as tastemakers of the finest up and coming UK talent. Heralded as ‘the gem of the southern festival calendar’, Burn It Down truly is an event like no other, providing intimate experiences with some of the biggest names in rock and metal on a backdrop you’d be hard pushed to find at any other UK festival. Across the 2nd and 3rd of September, Torquay is transformed into a musical oasis, welcoming eager festival goers to its sunny shores. Nestled amongst the pristine white beaches and palm trees of the English Riviera, Burn It Down promises revellers a weekend of sun, sand and singalongs to bring the festival season to a close.

Two days, three venues and over 50 bands mean patrons have plenty to choose from. Check out underground heroes like Orchards and Slow Crush over a pint of locally brewed beer at the Apple and Parrot, or catch hardcore heavyweights like Vexed and Heriot in the Attic. Culminate your evenings with a high-octane headline set at the Foundry from the likes of Deaf Havana and Trash Boat.

Walking miles between stages is a thing of the past, with all three venues within minutes of each other. This paired with carefully curated day splits means you can catch more of the music you love. Not ready to end the night there? Join us for the official afterparties- an event in its own right featuring El Moono, and Cage Fight. The south coast’s finest DJ’s and exclusive drinks offers will keep the party going to the early hours.

Having previously hosted the likes of Basement, Mallory Knox and Dinosaur Pileup, Burn It Down strikes the perfect balance of new and known and this year is no different. With final artists and day splits announced this week, this is an event not to be missed. Follow along on social media for updates and grab your tickets on Skiddle while you can. 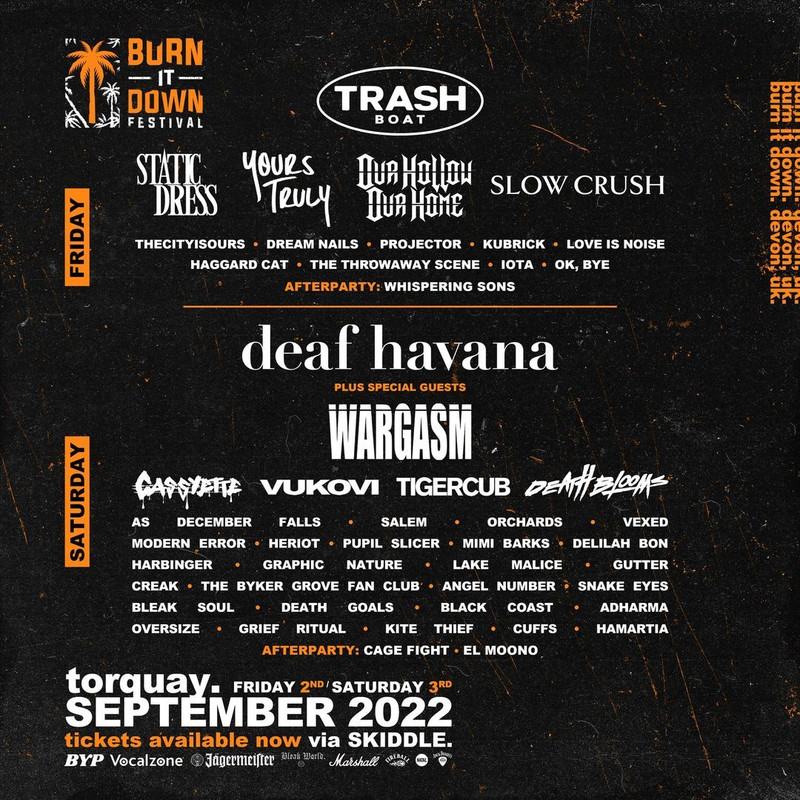 Burn It Down Festival Tickets

Burn It Down Festival Location & Travel

Burn It Down Festival Location & Travel

Get to Burn It Down Festival by