Don't stay in the dark....come along to the 2021 event, join your metal brethren and find out why Bloodstock's is the number one Metal event on the UK calendar. 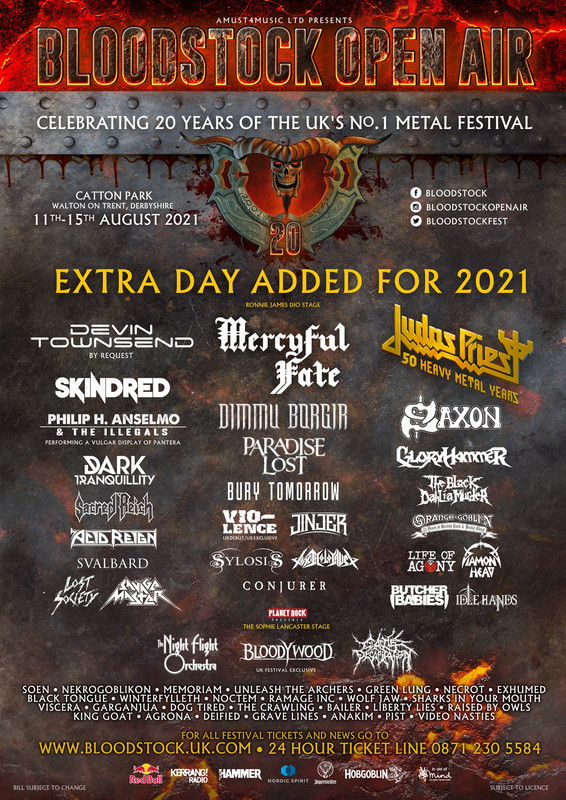 Thy Art Is Murder

There is a disabled viewing platform in the main arena to allow for easy viewing of the Ronnie James Dio Stage, we operate a one plus one policy ( Disabled customer + their Carer ). There are disabled toilets in the arena.

If you are camping in the disabled customer campsite, cars can be parked next to tents if required, although we cannot offer this to everyone as we are limited on space. For those not wishing to camp but come and go in their car each day, there will be disabled parking close by.

Although the festival ground is very flat, please bare in mind it is a greenfield site, therefore if we do have inclement weather there could be a few areas around the site not suited for wheelchairs. Stewards are on hand at all times should you need assistance.

Please do not turn up on the day expecting access to the disabled campsite and/or disabled car parking unless you have registered in advance as we cannot guarantee there will be space to accommodate.

Catton Hall is located centrally within the triangle of 3 East Midlands towns, Lichfield, Burton on Trent and Tamworth.

From the North: Follow the M1 Southbound and exit onto the A38 at Junction 28, heading West for Burton / Birmingham. Keep travelling until you pick up the B-O-A directions, which will exit you at the Alrewas / Rugely / Tamworth A513 turnoff. Follow the signs to the festival.

From the West or South (a): From the M5 (from the West) or the M40 (from London), take the M42 Northbound. Between Junctions 8 and 9 take the M6 toll road and exit at T4 onto the A38 Northbound. Follow the B-O-A road signs which will exit you at the Alrewas / Rugely / Tamworth A513 turnoff. Follow the signs to the festival.

From the South (b): Take the M1 from London, and exit at Junction 24, following the A50 to Stoke. After a few miles you will exit onto the A38 to Burton. Follow the B-O-A road signs which will exit you at the Alrewas / Rugely / Tamworth A513 turnoff. Follow the signs to the festival.

Want an easy way of getting to the site next year? Big Green Coach are the official and exclusive coach travel partner to Bloodstock Festival. Sit back, relax, and let their drivers take you, your mates, and your camping gear direct to the festival grounds! Choose from 26 locations from around the UK direct to the heart of Bloodstock, from the very reasonable rate of £34: BIRKENHEAD, BOURNEMOUTH, BRIDGEND, BRISTOL, CARDIFF, CARLISLE, CHESTER, GLASGOW, GLOUCESTER, LANCASTER, LEEDS, LIVERPOOL, LONDON, MANCHESTER, MIDDLESBROUGH, NEWCASTLE, NEWPORT, OXFORD, PRESTON, SHEFFIELD, SOUTHAMPTON, STOCKPORT, SUNDERLAND, SWANSEA, WARRINGTON, and WORCESTER. To guarantee your return seat, click here: www.biggreencoach.co.uk/bloodstock

By Rail or National Express Bus

Make your way to Birmingham New Street railway station. From Birmingham New Street station take the train to Lichfield City. This journey should take approximately 35 Minutes. Lichfield station is 7 miles from Catton Hall and is about 15-20 minutes drive. BLOODSTOCK will provide a mini-bus shuttle from Lichfield City railway station to Catton Hall starting on Thursday and running right through to Monday - see website for shuttle bus times.

Catton Hall is 20 miles from either Birmingham or Nottingham East Midlands Airport, 60 miles from Manchester Airport and 130 miles from Heathrow Airport.

Approximate Mileage to B.O.A from the following locations:

Bloodstock is the brainchild of Paul Gregory and Vince Brotheridge, who set about building a very specific type of festival, a festival the world had not seen since the likes of Donnington's infamous Monsters of Rock. The resulting Bloodstock festival has become an essential experience for any true metal head or heavy rock enthusiast. With each year’s bill being equally as impressive as the last, Bloodstock continues to excite, enrage, and electrify all true fans of the genre.