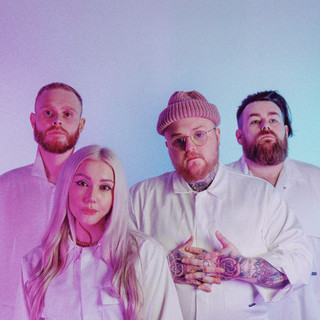 Born in Salford and raised on romance, The Lottery Winners can be found pottering somewhere in-between the blithe of the Beach Boys and the suffering of the Smiths.

The indie-jangle-pop quartet provide a melodramatic blend of momentous melodies, coupled with wistful and insightful lyrics. ‘The songs are the most important thing in the world to me,’ remarks Thomas Rylance, frontman and songwriting force of the band, ‘if they’re ever even a tiny fraction as important to other people, I’ll die a very happy man’.

‘I grew up listening to a lot of eighties bands,’ he adds, ‘bands like Aztec Camera, Orange Juice, Bowie, Blondie, Tears for Fears and New Order, but the ones that were always particularly close to my heart were the Smiths, The Cure and Joy Division, you know, all of the painfully miserable ones, but, if I have to be entirely honest, the reason I wanted to be on stage, that was Freddie Mercury’s fault’.

Although the band have played extensively live, supporting the likes of The Futureheads, The Charlatans and The Enemy and building up a very loyal and devoted family of fans, they have never officially released any music. When asked why, Robert Lally, guitarist and beard-barer of the band explains…

‘It’s never been the right time, and we’ve never been entirely happy with what we’ve recorded. We wanted to make sure that when we dive-bombed into the music scene, we splashed every single person around the pool. However, we’ve been very busy, working very hard, and we think, we’ve finally got it. Now it’s a just a matter of when. Soon we hope’.

The upcoming, debut EP, to which Robert refers, ‘Somebody Loved You’, release date to be announced, houses five tracks of, dare I say it, pure gold. You truly get the sense that every lyric and guitar hook has been crafted almost microscopically, with meaning and thought behind every single sound.

The Lottery Winners has been mentioned in our news coverage

Below is a sample playlists for The Lottery Winners taken from spotify.

Do you promote/manage The Lottery Winners? Login to our free Promotion Centre to update these details.