» Events » Events by artist » The Kut 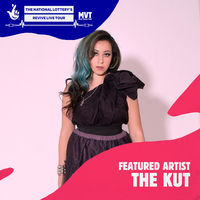 The Kut tickets and 2022 tour dates

The Joiners in Southampton

The Live Rooms in Chester

The Bobbin in Lancaster

The Kut - GRIT tour at O'Rileys

Infused with the of grunge and alt.rock with a killer live show, The Kut is the alter-ego of multi-instrumentalist, Princess Maha. Coming fresh with Top 10 Single 'ANIMO' and Top 10 debut rock album 'Valley of Thorns' in tow. Featured at No.12 in the NACC NMD Top Singles Chart this month, they are back and with a second album on the way featuring the full collective.

Combining influences from L7, Nirvana, Subways, Hole, Lunachicks, Incubus and Placebo. On record, they roar. Currently active on the UK and European rock scene, festival performances have included a recent headliner at River Stage, Isle of Wight Festival, as well as pre pandemic shows at Download, Camden Rocks Festival, Rebellion Festival, Glastonbudget, Nice N Sleazy and Strummercamp among others, while tours have spanned the UK, Italy, Czech Republic, Germany, Belgium and the Netherlands.

The Kut has been mentioned in our news coverage

Here are the latest The Kut mixes uploaded to Soundcloud.

Do you promote/manage The Kut? Login to our free Promotion Centre to update these details.