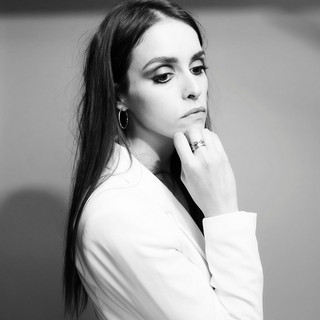 Tess Parks was born and raised in Toronto but moved to London at seventeen to pursue music and to study photography. She has played solo for the past four years. Having moved back to Toronto in 2012, she put together her amazing psychedelic backing band of "sexy and talented musicians”, The Good People. Early in 2013, she self-released a very popular EP ‘Work All Day/Up All Night’

Tess describes her songs as "lo-fi alternative drones with a hypnotic vibe”. Influences include Elliott Smith, friends the Dandy Warhols and all the classics: "I was brought up on Bob Dylan, Nirvana, The Beatles, Rolling Stones and Zeppelin.” She met Alan McGee in London. "We stayed in touch, that was it really. I just got so lucky. I love Oasis, Jesus and Mary Chain, My Bloody Valentine… He’s affiliated with all of my favourite musicians.”

Tess recorded her album of scuzzy, downbeat psychedelia (think Mazzy Star crossed with The Brian Jonestown Massacre) across the summer. It’s been pre-empted by the release of her debut single proper ‘Somedays’. Read more on Last.fm. User-contributed text is available under the Creative Commons By-SA License; additional terms may apply.

Tess Parks has been mentioned in our news coverage

A beautiful synergy with Anton Newcombe and Tess Parks

Here are the latest Tess Parks mixes uploaded to Soundcloud.

Do you promote/manage Tess Parks? Login to our free Promotion Centre to update these details.