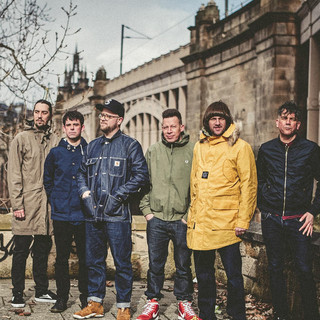 The Voodoo Rooms in Edinburgh

Smoove had met keyboardist Mike Porter through the local music scene in Newcastle and recruited him for his ‘Smoove Live’ project for the label Acid Jazz. Around Mike’s house one day they overheard a neighbour singing sublime melodies in his garage with friends which turned out to be none other than a young John Turrell practising in a band called ‘The Stevies’. After a couple of further sessions ‘scouting’ him they finally knocked on the door and had a chat and hit it off straight away.

A man of many facets, John Turrell was a skilled carpenter, working and teaching the trade to apprentices at a local college as well as his musical endeavours. After the trio performed several gigs together with various other guest musicians it was agreed they would create some new material and so they started to write and arrange a clutch of tracks that Smoove would record and produce.

Their first track was the now classic ‘I Can’t Give You Up’ recorded at Mike Porter’s house as his Hammond Organ was immovably wedged in his utility room! If you listen closely to the (now extremely expensive) original 7-inch recording released on the German label Club Tikka you can still hear Mike’s mum retrieving a pack of peas from the freezer… The track was so popular in the underground Mod and Northern soul scene all initial 500 pressings of the record sold out, resulting in online bidding wars, with the record going for as much as £166.

The first few tracks were received with a rapturous response and their newfound northern soul style demanded that a Smoove & Turrell live band was formed so they swiftly filled out their ranks with a crack team of like-minded Geordie musicians. Now as a full soul band they were creatively allowed to really stretch their legs both live and in the studio and their debut, Antique Soul was released in 2009 on Jalapeno Records.

It was in fellow soul head Craig Charles that they found their first radio champion as he supported them heavily on ‘The Craig Charles Funk & Soul Show’ which was a kick-starter for their assault on national radio eventually landing Radio 2 record of the week twice and a playlist on 6 Music.

By the time their second album – Eccentric Audio was released the band had already been touring far and wide building up a loyal fan base helped by continued support from radio which culminated in two playlists and a New Year’s Eve live session on Radio 2. With two critically acclaimed albums under their belts and word starting to spread across the pond to America – S&T tracks were used on TV shows, feature films and an ABC network primetime ad campaign, as well as in video games such as The Crew. KCRW in LA put Hard Work in their coveted Today’s Top Tune slot further exposing the band to west coast tastemakers and the boys becoming unlikely darlings of the US sync business.

Smoove & Turrell has been mentioned in our news coverage

Smoove & Turrell to play end of year show in Newcastle

Five bands you need to see in November

Here are the latest Smoove & Turrell mixes uploaded to Soundcloud.