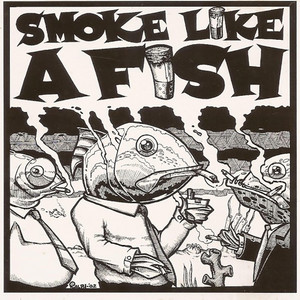 With an up tempo two-toned Ska-popunkish attack, Smoke like a Fish from Mid Wales relentlessly pump the off beat with groove and aggression, behind brass splattered riffs, catchy choruses and social comment.

After 2 EPs on our own Kippertronix label and a few appearances on various compilations, we sign to `Do the Dog` and release the self-titled debut album in April 2002. That is then followed by the `Survival of the Hipest` album February 2004. And last year, April 2005 an early years, demos, re-mixes and rarities album `Heres one we made earlier` was released. Read more on Last.fm. User-contributed text is available under the Creative Commons By-SA License; additional terms may apply.

Smoke like a fish hasn't been mentioned in our news coverage

Below is a sample playlists for Smoke like a fish taken from spotify.

Do you promote/manage Smoke like a fish? Login to our free Promotion Centre to update these details.