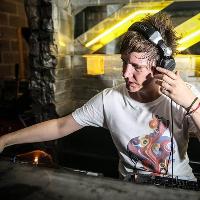 Deck Teaser's passion for DJing started back in 2002, when she worked alongside DJ Lynda Phoenix on the Princes Trust DJ Course. Lynda was so impressed with her talents, that she advised her to seriously look at a professional career as a DJ! Sherrie then went on to study a National Diploma in Music Technology at college in Leeds, where she gained some experience in some high quality studios which enabled her to dip into the production side of things as well. Since first getting noticed working with The Princes Trust, she's been aiming to work her way up the ranks in the hard dance scene.

Her first club sets included Hangar 13 (Sunderland) and Random (Kettering), and it didn't took long for the industry to sit up and notice her talent. She got residencies at Digital Society in Leeds, playing underground electro, and also at Battle of the Sexes in Hull, as well as playing various guest sets in the UK, sharing the booth with some of the finest talents in her field. She has been billed on the same lineup with DJs such as Billy Daniel Bunter, Daley, Wid and Ben, Sarah G (aka Ninja Girl), Vicky Devine, Kernzy and Klemenza, Alex M.O.R.P.H, Jon O'bir, JFK, Anton Nathrass, Will Gold, Jonas Steur, Jp + Jukesy, K Complex, Audiophreakz (AUS), Leon Boiler, Si Stylus and Will Holland, to name a few… She also torn up at Frantic at Marino and Sundissential at Gatecrasher, rocked warehouses in Texas and was booked for Charlys Angelz in Play2, Ibiza, and several clubs in Canada. Furthermore, she had a regular spot at the Shap Hard Outdoor parties, where she played to crowds of Goodgreef regulars, and nowadays she is resident at F.T.N. (Fcuk The Neighbours) in Ashton Under Lyne.

One of the best qualities of this lady is that she isn't afraid to rock as hard behind the decks as she would on the dance floor, undoubtedly stating her presence with that elusive combination of intelligent, watertight programming, advanced technical ability and trickery. Her sets fizz with energy and charisma, always eclectic yet never predictable. Casually drawing from a diverse range of material, Sherrie has come to pioneer a uniquely modern brand of hard dance, sculpting, cutting and chopping from all manner of tastes and styles to leave the mixer battered, used and abused and the dance floor tingling. It is this, coupled with her reputation to consistently deliver, that is gaining Sherrie the kind of momentum, support and respect that a woman of her talent deserves!

Sherrie Metcalfe has been mentioned in our news coverage

Here are the latest Sherrie Metcalfe mixes uploaded to Soundcloud.

Do you promote/manage Sherrie Metcalfe? Login to our free Promotion Centre to update these details.