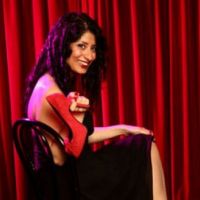 Shaparak "Shappi" Khorsandi is an Iranian-born, UK-raised comedienne. She was born in Tehran, but early in her life her family was forced to flee Iran for London after her father (Hadi Khorsandi) criticized the Ayatollah in a satirical poem. Khorsandi performs stand-up comedy, having been a noted performer at Joe Wilson's Comedy Madhouse in 1997. She has appeared on many BBC Radio 4 programmes, including Quote... Unquote, Loose Ends, You and Yours, Midweek, Just A Minute, The Now Show and The News Quiz. She also writes an occasional column for online magazine Iranian.com.

Shappi Khorsandi has been mentioned in our news coverage

Do you promote/manage Shappi Khorsandi? Login to our free Promotion Centre to update these details.