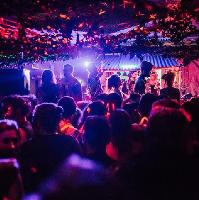 The Mash House in Edinburgh

The Bongo Club in Edinburgh

With full, immersive set design and dÃ©cor, and a soundtrack spanning old and new sounds of Africa, the Caribbean, Latin America and New Orleans, it has proven a big hit with people at clubs and festivals. Since 2010 Samedia has popped up at The Roxy Arthouse during the Edinburgh Festival Fringe, appeared as a regular clubnight at The Third Door and travelled to Boomtown Fair, Kelburn Garden Party and Knockengorroch Festival.

When you can't come to the party, we take the party to you with the Samedia Outrider, Mobile Disco and Fruit Shop. It's basically Samedia on wheels.

Samedia Shebeen has been mentioned in our news coverage

Wee Dub is back for an Edinburgh Hogmanay rave

Do you promote/manage Samedia Shebeen? Login to our free Promotion Centre to update these details.