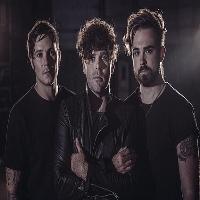 “They have real scope and majesty about the music. They sound as though they are made for festivals and arenas.” Music News

The last three years have felt like an incredible voyage of discovery for Reigning Days. They have gigged in Russia, India, Poland, America and the UK. Played major festivals and intimate venues, supported international acts and headlined stages themselves. Their singles have been played on BBC Radio 1, XFM, KROQ in LA, Flux FM in Germany, Virgin in Italy and Radio Doble Nueve in S. America. Their music has been used in feature films, US TV trailers and one track was featured by the BBC throughout their winter Olympics coverage. Every step of the way has felt like a journey leading to this moment. The band's new material is a return to their guitar based rock roots and they have never felt more comfortable, more at ease with their music and their live show.

The new single "Friendly Fire" is released this November, with an EP next February and an album to follow in May.

Reigning Days has been mentioned in our news coverage

Here are the latest Reigning Days mixes uploaded to Soundcloud.

Do you promote/manage Reigning Days? Login to our free Promotion Centre to update these details.