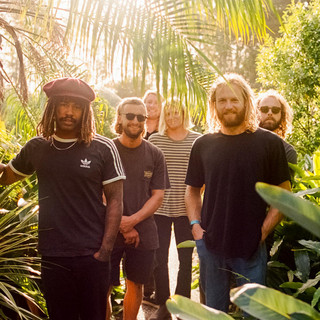 2015 was a big year for Sydney Psych/Reggae 6-Piece Ocean Alley. Selling out shows across Australia, releasing their 2nd EP ’In Purple’ and putting the finishing touches on their much anticipated debut album.

The band pushed on into 2016, playing the summer festival circuit in Australia, selling out shows in New Zealand, as well as their biggest East Coast Australian run to date selling out completely in May. They are now in the middle of an 8 week tour of Europe, consisting of 40 shows across the UK, Netherlands, Germany, Italy and France. They started off with a bang with a Sold Out show in Amsterdam, before mind blowing sets at Surfana and Green Vibrations festival, as well as a memorable first impression left on Berlin and Munich.

Arriving in Europe with their well received debut record ‘Lost Tropics’, and a reputation for a wicked live show, Ocean Alley are putting their mark on the continent and gaining momentum the more that the tour rolls on. Do not miss your chance to see this band live in the UK in July and be completely and utterly blown away.

Ocean Alley hasn't been mentioned in our news coverage

Here are the latest Ocean Alley mixes uploaded to Soundcloud.

Do you promote/manage Ocean Alley? Login to our free Promotion Centre to update these details.