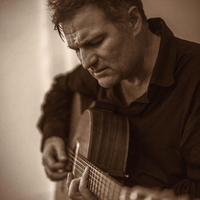 Accomplished guitarist, songwriter and acoustic performer, Nick got his professional start on the mid-'80s album Whatever Happened to Jugula, a collaboration of his father, Roy Harper, and Jimmy Page. From that time on, Nick toured and recorded regularly with his dad. His own debut as a leader came in 1994 with the EP Light at the End of the Kennel. His first full-length, Seed, followed a year later. Singer, composer, and former Squeeze frontman Glenn Tilbrook heard Harper perform and was impressed enough to sign him to the new label Quixotic Records. After touring around the U.K., North America, and Japan, Harper recorded the first of his albums for Quixotic; the 1998 release, Smithereens, was followed by another tour. His third album Harperspace, came out in 2000. After 11 studio albums, 3 live CDs, 2 EPs and a rockumentary style DVD 'Love is Music', Nick's work is still as fresh and vital as that of his first solo release in 1994 but as evidenced by his highly personal 2020 album Phantastes, he still has time to sing about the most important things in his world - family, friends, love and life.

Nick Harper has been mentioned in our news coverage

Below is a sample playlists for Nick Harper taken from spotify.

Do you promote/manage Nick Harper? Login to our free Promotion Centre to update these details.