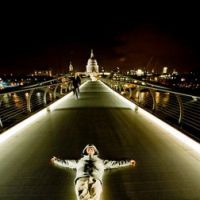 Morris Gould the Mixmaster blossomed out of the London pirate-radio scene in the 80s. He began to take hold on the discipline creating a ONE TRICK PONY that did it all via loops beats and samples...culminating in audio soundscapes designed to induce dreamy hypnotic almost narcotic states for the listener. He started working as the Rhythm Method but in '85 adopted the Irresitible Force name when he began collaborating with Des De Moor.

Although this match-up was short lived, this was the birth for Madhouse which gave rise to the whole ELECTRONICA RAVE TECHNO era...He did a brief tour with Meat Beat Manifesto and the popular Shamen but his true genius seemed to become evident in the early 90s when he began appearing regularly @ Heaven ... which was the Acid and MDMA fueled chillout club originating from another ambient pioneer, Dr Alex Paterson, who was the brainchild of the Orb.

Mixmaster Morris has been mentioned in our news coverage

Move D Interview: This thing of ours

DJ Harvey to play all night long at Ministry of Sound

Below is a sample playlists for Mixmaster Morris taken from spotify.

Do you promote/manage Mixmaster Morris? Login to our free Promotion Centre to update these details.