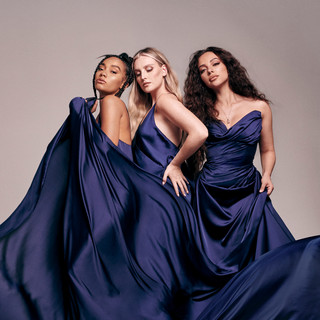 Little Mix (previously Rhythmix) are the 2011 winners of The X Factor, and the first group to ever take the grand prize. The Cannonball Songfacts reports that their debut single, a cover of the Damien Rice ballad Cannonball was released digitally the morning after their win. The song was produced by Fazer, who is the N-Dubz colleague and boyfriend of their mentor, Tulisa Contostavlos.

A four-piece girlband made up of Essex barmaid Jesy Nelson (20), High Wycombe waitress Leigh-Anne Pinnock (19), and South Shields students Perrie Edwards and Jade Thirlwall (both 18). Originally known as Rhythmix, the group was originally formed at bootcamp from singers who auditioned as soloists. On 26 October 2011, Rhythmix announced that they would change their name due to pressure from a children's music charity of the same name, after the programme tried to trademark "Rhythmix" in Europe. A spokesperson for The X Factor said, "At the request of the charity Rhythmix, the members of the girl group Rhythmix have decided to change their name, a decision which has the support of Syco and TalkbackTHAMES. The group's new name will be announced in due course". It was reported that the group decided to make the change, despite no legal reason to do so, to avoid any difficulties for the charity. They announced that they would now be known as Little Mix on 28 October 2011 following on from this, the band said: "We all agreed on it, including Tulisa, because it just felt right"

Little Mix has been mentioned in our news coverage

The best places to go in London

Below is a sample playlists for Little Mix taken from spotify.

Do you promote/manage Little Mix? Login to our free Promotion Centre to update these details.