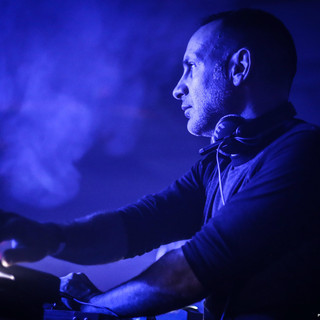 Late Nite Tuff Guy is a new breed of disco vigilante, prowling the neon streets on a mission from God / David Mancuso to reclaim the clubs and fuck shit up. The scandalous alter-ego of genuine techno legend HMC (known to his momma as Cam Bianchetti), Late Nite Tuff Guy (LNTG) puts the acrimony in acronym, the oh in disco, the amp in camp and the dang in dangerous. His shit’s controversial, but it don’t stink.

Peddling the most credible of disco edits – sexy and tasteful to a tight white tee – and accruing some serious acclaim from an illustrious roll call of heads in the know (including Jeff Mills, Todd Terje, Richie Hawtin, Laurent Garnier, Ellen Alien, Steve Lawler, Carl Cox, Nic Fanciulli, Jackmaster, Optimo and The Don himself – Sir Greg Wilson, who remixed LNTG’s One Nite in a Disco), the world is his and it’s about to blow up.

Under his earlier HMC guise, our tuff, dark and oh so handsome saviour earned the moniker ‘The Godfather of Australian Techno’, and rightfully so. A seminal figure in Australian dance music, HMC was one of the first artists to propel Antipodean techno and house into the world’s clubs with bona fide mid-90s classics such as Phreakin’, LSD and 6AM. Proper soul music with an electronic pulse, HMC’s soundtracked the planet’s most discerning discos and is set to continue this dance-floor dominance with his LNTG incarnation.

The man behind the acronyms (and he is a mere mortal despite the reverence in which he’s held and the orgasmic gasps from awe-struck punters which invariably greet his entrance to the club) has been in this game (and ahead of the game too) for a very long time, and it shows. Not on his face – which is as chiselled and kissable and ageless as a white Nile Rodgers – but in his DJ sets, edits and original productions, which exhibit the kind of effortless mastery that you only achieve once you’d paid your dues and played your heart out to every kind of crowd imaginable, from kids to queens and everyone in between.

That’s why nobody was surprised when LNTG became an online sensation, with Cam’s on-point edits of classic tracks receiving over 4 million plays (and counting) on Soundcloud. In addition to the internet adulation, LNTG’s impeccable edits have also been released on vinyl through some of the best and most respected edits labels around the world, and his I Get Deeper track came out via Light Speed Recordings and was also included on a Get Physical release with Joris Voorn.

These LTNG cuts are rapidly becoming classics in their own right, deftly reworking vintage disco and soul tunes into modern clubbing wonders and proving that Cam is an alchemist of dance music. There is magic in his fingertips, fire in his loins and hair on his chest. He is tuff, but he’s a lover too. All of this will be revealed in its full x-rated glory when he releases his debut album of original material in the not too distant future.

Late Nite Tuff Guy has been mentioned in our news coverage

Do you promote/manage Late Nite Tuff Guy? Login to our free Promotion Centre to update these details.