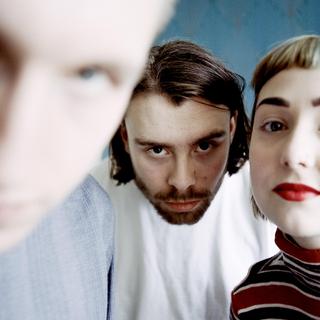 Kagoule are three teenagers from Nottingham. They are one of the best new bands in Britain.

A bold claim, certainly - and music is no competition – but these three friends since childhood are currently crafting some of the most dynamic guitar music out there. Theirs is an output that exists in the type of self-created world that can only be constructed by people who have come of age together. Who have shared their formative, life-changing moments. Who know who they are and where they are going.

Fiercely independent and with a steadfast vision for the minutiae of every aspect of their presentation, Kagoule are band born out of the school-yard, the trio of Cai Burns, Lucy Hatter and Lawrence English coming together a half decade ago. “We represent the sound of boredom,” says Hatter, of the band’s inception. “The sound of three 15 year olds wanting to do something,” says Hatter.

Recorded while still in their teens, Kagoule’s debut album Urth draws on a wealth of unexpected influences – the best US underground obscurities of the 80s and 90s, the dark folk music of Pentangle and playing style of Bert Jansch, contemporary fantasy and sci-fiction literature, ancient wood-cut artwork and so much more. Sound-wise they recall the energy and ideas of Bikini Kill, the sugar-dusted grunge of Smashing Pumpkins and the angular rhythms and confrontational post-hardcore blueprint of Fugazi, Slint and fellow Nottingham band Bob Tilton, with a pedal rack (metaphorically) half-inched from Dinosaur Jr. But – crucially - perhaps only to those old enough to have heard those bands first time around. “People would come and see us and say we reminded of certain bands from the past who we had not heard,” he adds “We’d investigate them and be blown away.”

Kagoule’s was a reverse education of sorts, then. They were raised on a steady diet of... everything. They are children of the internet age, the trio voraciously absorbing decades of music before they could legally drink. Their YouTube compilations (dubbed Dr. Kagoule’s Musical Psychotherapy Sessions) display a love of kindred spirits from the sonic underworld: Lungfish, Swell Maps, Love, Wire, The Gun Club, Butthole Surfers, Swans, Aphex Twin, Bush Tetras, This Heat, Fat White Family and Neu! all feature.

Out of all this comes Urth, recorded with producers Ross Orton (Arctic Monkeys, M.I.A, The Fall) and Pete Fletcher (Childhood). It takes its title from fantasy / sci-fi author Gene Wolf’s 1987 novel Urth Of The New Sun, from his New Sun series of. Within these works, Wolf used archaic language, obscure words and allegory – all of which influence Kagoule’s oblique lyrical approach. “I try not to write about things like, breaking up with my girlfriend,” explains Cai. “I want to go elsewhere, lyrically. So one song is about a one winged half-man/ half-amphibian that’s dehydrating on an island. Another is about a conscious table.”

Kagoule has been mentioned in our news coverage

The Wytches interview: Getting trippy with it

Here are the latest Kagoule mixes uploaded to Soundcloud.

Do you promote/manage Kagoule? Login to our free Promotion Centre to update these details.