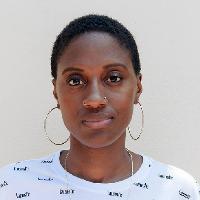 Keturah aka K2RAH (pronounced keh-TWO-rah) is a Manchester-bred, London-based creative with an active passion for new music, visual art and digital content.

The self-described 'slashie' (DJ/ Photographer/ Content Creative/ Promoter) has cultivated a successful multi-disciplinary career as an established DJ, a print-published photographer, founder of the new music platform So Future, and a digital producer at BBC Radio 1 and 1Xtra.

K2RAH has been championing exciting new artists and forward-thinking sounds since 2010 when she created her first blog; AllAboutGoodMusic, which later grew to become a multi-platform offering comprising of a YouTube channel, weekly radio show and award-winning live music events.

Since founding the London based collective and club night So Future in 2016, K2RAH has promoted 00s of events, curated an international line-up for a So Future-hosted festival stage and competed in the inaugural Roundhouse Rising soundclash.

As a DJ, she’s built a reputation for playing fun and energetic DJ sets and effortlessly weaving along the spectrum of future sounds, electronic, bass, garage, hip hop & alt- R&B.

Alongside touring with New York rapper Princess Nokia, K2RAH regularly plays at brand events, club nights, festivals and live events across the UK, including Glastonbury, Bestival and Lovebox, Childish Gambino's VR vinyl launch party, opening up Main Stages for the likes of Skepta and Major Lazer, and playing internationally in Paris and Ibiza.

K2RAH has been mentioned in our news coverage

Here are the latest K2RAH mixes uploaded to Soundcloud.

Do you promote/manage K2RAH? Login to our free Promotion Centre to update these details.