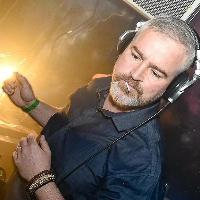 Jay Wearden started his DJ career in 1988 after initially being a scratch DJ in a Hip Hop group.He gained his first weekly residency at Precinct 13 in the same year.

After an unsuccessful stint in Ibiza, Jay secured a weekly Thursday & Saturday night at the infamous Thunderdome at the age of 19. The seminal club was packed to the rafters each week, becoming the go to venue for the masses who wanted an alternative to what the Hacienda had to offer. Jay built a strong partnership with his mentor, the highly respected DJ Steve Williams. This period was most fundamental period in his career which gave him his foundations in his future musical style and direction.

This started Jay on the journey to becoming one of key players in the rise of House scene in Manchester. Playing at the well documented Blackburn raves and across the country, primarily a constant feature of huge Streetrave parties around Scotland.

After the demise of The Thunderdome, he continued to champion this deep techno sound that been born at ‘The Dome’ with a series of highly successful clubs nights throughout the early nineties such as The House, Banshee, The Hippodrome & The Riverside.

His style of uncompromising eclectic music been cited as inspiring numerous DJs and bands on the scene in this period. Names such as Autechre and Sasha, the latter named Jay as one of his influences on his Air Drawn Dagger album.

Jay Wearden has been mentioned in our news coverage

Here are the latest Jay Wearden mixes uploaded to Soundcloud.