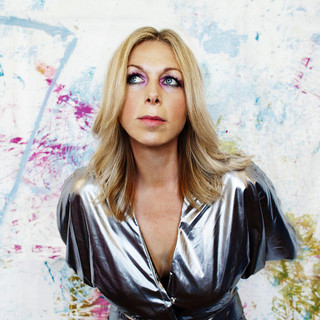 Working as an omnipresent pop figure in her genuinely independent micro-industry for over 20 years, Jane Weaver is a rare example of a passionate and resilient Northern female artist who re-creates, re-invents and refreshes where many others come and go. Her synth-pop psych and conceptual pop LPs have earned her a faithful fan base which has extended to a long discography of collaborations often released through her own musical "Woman’s Institute" imprint Bird Records which she runs with Finders Keepers Records in Manchester. Late 2014 saw the release of her new self produced synth driven LP "The Silver Globe" made with a wide cast of global collaborators such as soundtrack composer David Holmes, Andy Votel with extra music from Australian prog legends Cybotron, Hawkwind and sound effects from electronic pioneer Suzanne Ciani. Wearing her penchants for French wave, cosmic Deutsch rock and European fantasy films on both of her sequinned sleeves Janes 6th studio album follows the highest critical acclaim for her previous self funded album ‘The Fallen By Watchbird’ and a campaign that bought together the unlikely coupling of artists like Wendy & Bonnie, Demdike Stare and The Focus Group. This year Jane's new brand of motorik cold-funk and technicolor domestic synth flourishes unite 10 new conceptual pop songs about power-plant fun-fairs, sci-fi education centres and post-apocalyptic love affairs while her characteristic gossamer vocals cross octaves to theatrical deft effect.

The Silver Globe has been voted as Piccadilly Records No1 album of 2014!

The Quietus. ‘The Silver Globe is arguably her most sonically adventurous work to date.’

Mojo **** ‘she is amongst todays most striking sonic auteurs’

The Times **** ’Stylish and highly original’

Jane Weaver has been mentioned in our news coverage

TOY interview: It feels good to be back

David Rodigan and Craig Charles added to Tramlines line up

Here are the latest Jane Weaver mixes uploaded to Soundcloud.

Do you promote/manage Jane Weaver? Login to our free Promotion Centre to update these details.