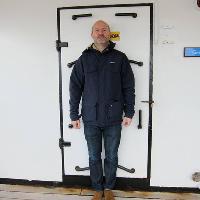 DJ James Holroyd a.k.a. Boggy started plying his trade back in 1991 in the heady days of the original Back to Basics at Leeds' Music Factory. He was introduced to the decks playing a mixture of funk, house, disco and hip hop, and by 1992 his unique style and cheeky personality had secured him a job as resident.

In the meantime, a move to Manchester strengthened his contacts with Manchester's bubbling underground club scene. In 1993 he joined forces with the Jockey Slut Magazine team to form a house and techno based club night called Bugged Out!, and in 1997 this weekly night earnt itself the Muzik Magazine Award for Club of the Year. James is still resident at Bugged Out and plays across the UK and Europe.

James Holroyd has been mentioned in our news coverage

Electric Chair announce line up for their End Of Year Riot

Do you promote/manage James Holroyd? Login to our free Promotion Centre to update these details.