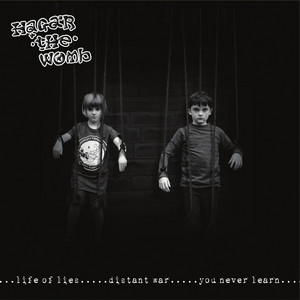 Hagar the Womb were a punk band active in the early 80's and part of the Anarcho Punk movement.

The band was formed in the toilets of the Wapping Anarchy Centre, established by the efforts of seminal Anarchist bands Crass and Poison Girls, in 1980. One week after forming they played their first gig with Zounds and The Mob. The band were originally all-female in an attempt to add a female voice to what they saw as a male-dominated movement, and the band refused to conform to the stylistic constrictions associated with bands of the time.

The band toured the UK punk circuit for five years releasing two 12" singles and recording a Peel Session for Radio One (11 February 1984). Their first offering The Word of the Womb (released on Conflict's Mortarhate label) dominated the UK Indie Chart during 1984, being kept off the No.1 spot by larger, more mainstream, acts such as The Cure and The Smiths.

After releasing Funnery In a Nunnery the next year the band effectively split with no new material being recorded. The bands' drummer -- who has a degree in Philosophy and Literature -- went on to become a cult DJ under the name Chris Liberator. Bassist Mitch has been playing bass in avant garde ensembles.

During its lifetime the bands lineup fluctuated reguararly but often included:

Hagar The Womb hasn't been mentioned in our news coverage

Below is a sample playlists for Hagar The Womb taken from spotify.

Do you promote/manage Hagar The Womb? Login to our free Promotion Centre to update these details.