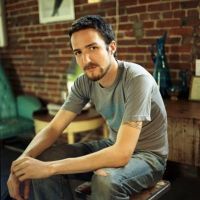 For three long and often lonely years of life on the road, plying a brand of honest and passionate folk/punk, Frank Turner continued to rise to prominence with an ever increasing following. But it was in the sweaty climes of the Lock Up Stage at Reading and Leeds 2008 that his solo career really started to take off. Inside the packed out tents, heaving with adoring fans and intrigued passers-by, Frank led the congregation in a mass sing-a-long; a stirring set that not only sparked the interest of the British mainstream but resonated unassumingly across the pond as a wealth of American punk bands watched approvingly from the sidelines.

No stranger to the festival, Frank had not only played the Lock Up Tent with former hardcore band Million Dead back in 2005 but also as a tentative solo artist in 2007 when debut album ‘Sleep Is For The Week’ was just an underground success. Within the following year, Frank’s popularity grew with yet more touring and the release of second album 'Love Ire & Song' in March 08. He started to play larger headline shows and develop the live band that he was looking for.

The profits of all his hard work came together that festival weekend; it kicked started a new wave of interest and thanks to the unwavering support from Radio 1 DJs Mike Davies and Steve Lamacq, the rest of Radio 1 began to follow suit. Soon enough when Frank’s single 'Long Live The Queen' – taken from ‘Love Ire & Song' – was released in October, it made the R1 C-list, was Single Of The Week on Sara Cox’s show and helped sell out Frank’s largest UK headline tour culminating in a bursting-over-capacity-finale at London’s Scala. The following single 'Reasons Not To Be An Idiot' released in January of this year eclipsed those successes by graduating to the R1’s B-list, 6Music’s A-list and XFM’s daytime playlist, prompted a Live Lounge session for Sara Cox, a Hub Session for George Lamb as well as making iTunes Single Of The Week all helping to recruit a new army of Frank followers.

It was also during this time that sections of the US punk fraternity began to take notice. Having watched the infamous Lock Up Stage set at Reading and Leeds, Vinnie from Less Than Jake got in contact asking to release 'The First Three Years' album (a collection of all early and previously unreleased material, live tracks and b-sides released in the UK in December 08 on his vinyl label Paper and Plastick. Chuck Ragan took him on the Revival Tour with Tim Barry across America, he did a few shows with up and coming stars Fake Problems and New Jersey boys The Gaslight Anthem invited him to support them on their huge UK and European dates in the early part of this year. It was evident that word was spreading throughout the punk scenes both sides of the Atlantic and by the time Frank flew in to Austin, Texas for the annual industry showcase SXSW in March, a whole new chapter in his story was about to begin.

Frank’s brand of folk songwriting, catchy melodies and punk passion had reached the ears of the CEO of US independent label Epitaph Records, Bad Religion’s legendary guitarist: Brett Gurewitz. Excited by what he had heard and seen when Frank headlined LA’s notorious Viper Rooms in March, Gurewitz got in contact and soon enough plans were formulated and a worldwide deal was inked. With loyalty and integrity firmly intact, Frank kept his relationship with his existing label Xtra Mile Recordings for all releases in the UK and Ireland and so the two labels will work closely for what will undoubtedly be an exciting new era in Frank’s ever evolving career.

“Frank Turner’s music is a revelation to me,” says Gurewitz. “I can’t stop listening to it. It’s a real privilege to get out there and help Xtra Mile spread the Frank Turner gospel.”

Frank Turner has been mentioned in our news coverage

"The industry is staring into the abyss" - MVT launches #saveourvenues campaign

Below is a sample playlists for Frank Turner taken from spotify.

Do you promote/manage Frank Turner? Login to our free Promotion Centre to update these details.