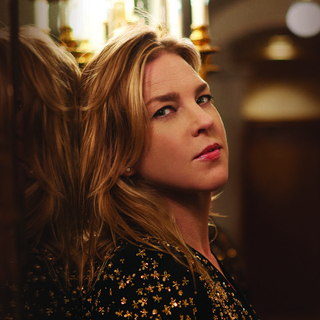 Diana Krall was born into a musical family in Nanaimo, British Columbia, Canada (on November 16, 1964). She began learning the piano at the age of four. In high school, she started playing in a small jazz group. At the age of fifteen, she started playing regularly in several Nanaimo restaurants. She also spent some time in Toronto studying with Canadian Jazz great, Don Thompson (Bass/Piano) and with the support of the Canada Council for the Arts she moved to the U.S to continue studies and develop her career. Her playing attracted the attention of bass player Ray Brown, who brought her into touch with influential teachers and producers. At the age of seventeen, she won a scholarship from the Vancouver Jazz Festival to study at the Berklee College of Music in Boston. After three terms she moved to Los Angeles to study with Jimmy Rowles, with whom she also began to sing. In 1990, Krall relocated to New York. She is married to British musician Elvis Costello. User-contributed text is available under the Creative Commons By-SA License and may also be available under the GNU FDL.

Diana Krall hasn't been mentioned in our news coverage

Below is a sample playlists for Diana Krall taken from spotify.

Do you promote/manage Diana Krall? Login to our free Promotion Centre to update these details.